Weather Idioms You Need to be Using
by Lingoda Team
March 17, 2020 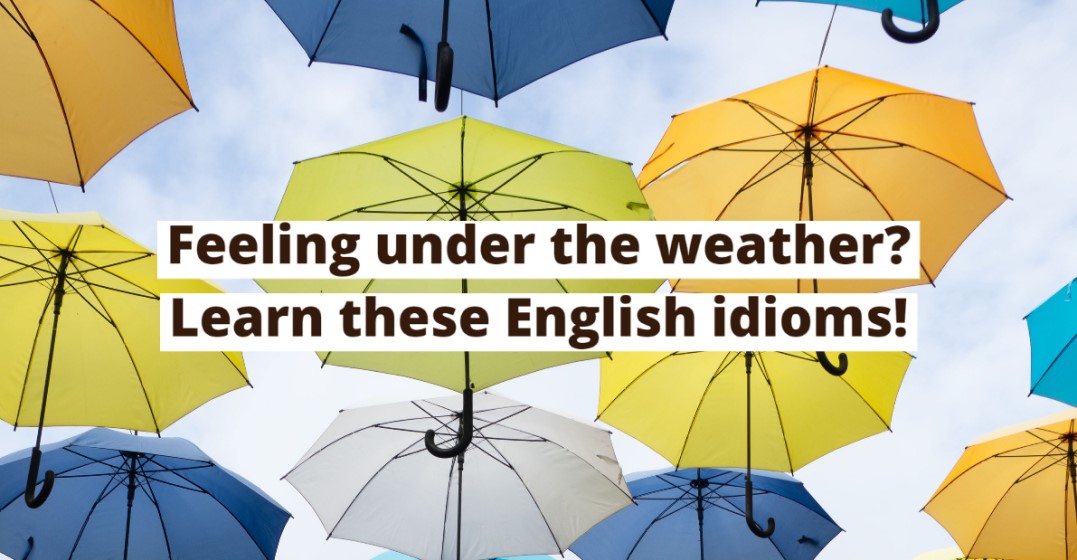 At Lingoda we have talked before about how important are English idioms if you wish to master the language of Shakespeare. Idioms are not only funny, but they are also very handy, since they allow us to convey an idea in the clearest way possible without even mentioning that idea directly. That’s the reason why native speakers use them very frequently and why you need to become familiar with them if you are learning English as a foreign language.

To help you broaden your vocabulary and expand your idioms collection, a couple of weeks ago we brought you a few idioms related with money, and this it’s the turn for the weather. Last month we published this list of 12 essential English Idioms in collaboration with Keep Smiling English (KSE), and now they have come up with a cool list of weather idioms (pun intended).

Save up for a rainy day

In this common idiom, the main part is “a rainy day”. This expression refers to a “possible future time of hardship or relative poverty”. When we add the phrasal verb “save up”, we mean to put some money aside for whenever it may be needed. Here we have some examples:

Once you have the basic home comforts, it’s important to save up for a rainy day.

Everyone needs money in the bank saved up for a rainy day.

If it’s raining cats and dogs outside, you’d better take an umbrella with you or even stay in, for that matter. The idiom “rain cats and dogs” means to rain very hard or a lot. In this case, the form of the idiom has to do with the weather (i.e.: rain) and so does the meaning.

I was going to go shopping, but it suddenly started raining cats and dogs, so I stayed home.

Spring is weird: some days it’s sunny while others it can be raining cats and dogs.

Be careful with this idiom: the verb “come” never changes here. The meaning of this usual idiom is “whatever happens” or “whatever the weather is“. So if someone supports you “come rain or shine”, it means that they will be there for you no matter what. Let’s see a couple of examples:

I’ll always be there for you, come rain or shine.

Ben was on cloud nine whenever she was around.

They’ve just had a baby, so they’re on cloud nine all day long.

A storm in a teacup

Have you ever ended up having a heated argument over something completely irrelevant? Or maybe you’ve been worried sick about something that you then realised was trivial? That’s exactly what “a storm in a teacup”: a small problem that has been blown out of proportion. This idiom is also a common one, as we saw last week, and it has different variations. For example, North Americans say “a tempest in a teapot”, which is quite similar to the British idiom.

In my opinion, the whole thing is just a storm in a teacup.

All this controversy about same-sex marriages seems a storm in a teacup to me.

He thinks that buying the lottery will make him win some time, but I know it’s just a rainbow chase.

They’re giving their marriage another shot, though it’s probably just a rainbow chase.

Keep Smiling English (KSE) is an English academy based in Granada (Spain). Apart from offering a wide range of English courses for every level, they have an amazing blog and very useful YouTube channel.

If you’d like to further explore your weather vocabulary, head over to our website and start your trial with Lingoda today.