How to Have a German Accent 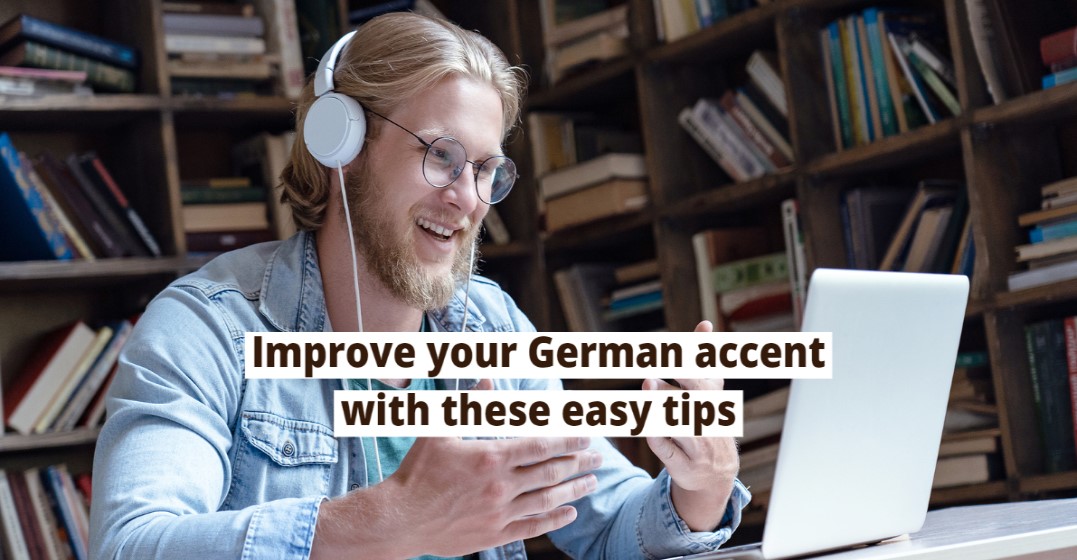 Let’s have a look at how to sound more a like a German. Although, let me tell you, there actually is not the one and only German accent, but several ones, depending on the region you’re from. So, if after practising what you’re about to read, you still have a bit of an accent left, just say you’re from Bavaria and people will nod pitifully and give up on the topic.

How to pronounce the German R

The R in German is not like any other: Not like the Spanish, the French, the Russian and certainly not like the English one. We could go on here, but I guess you got the point. It has two main ways of being pronounced:

At the end of a word in combination with an E, it becomes an A: So, we don’t say “Dönerrrrr” in German, but more likely “Döna”. Easy peasy. It gets trickier when it is at the beginning or in the middle of a word. To train that pronunciation, I recommend my students to take a mouthful of water and gurgle. The place where you make the water move is exactly the same place where the R is formed, just not as intense. It’s like one quick gurgling with your own saliva. Hmmm, yummy… ”Döna”, anyone?

How to pronounce ch in German

The next sound is also quite deep down in the throat, or at least one of them. The combination of CH can be pronounced in two different ways. It depends on its surroundings: If the CH is proceeded by an O, U or A, it is pronounced as if you had something really nasty in your throat and tried to get it out. Also, quite yummy, I know, but the things you do for a good accent… If you’re French or Brazilian, it’ll be easy for you, because you just use the pronunciation of the R in French/Brazilian Portuguese. If not, well, remember the last time you had a bad cold and lot of phlegm that you wanted to come out badly? Go for it: “Ach, das ist doch einfach!”

The other option is to pronounce it as a bit of a hissing sound, formed at the start of your throat. So imagine you are an angry cat, next time you say: “Ich möchte bitte einen Döner” (don’t forget: Döna!) Some say, it’s kind of an H with a bit of friction in your throat, but the hissing cat just nails it, in my opinion. This pronunciation is used with any other letter before the CH (mostly E, I, Ü, Ö or R). How to pronounce German Umlauts

This is one of the topics my students are most afraid, but actually, you often have them in your own languages, too. And if not, there is an easy way to form them.

Let’s start with the Ä, that you really find in a lot of languages. It is pronounced as the A in the English word “chocolate”, the AI in the French word “clair”  and the E as in the Spanish word “estar”. (And here, my languages end, so I can’t give examples from other languages, sorry! Piece of cake!

Even the Ö you find in English and French: Think of the I in “Sir” or the EU in French “meilleur”. For everyone, who doesn’t speak either of these language, here’s the trick from my dear phonetics professor: say the letter E in German, than slowly make your lips round as if you’d like to kiss your darling while you keep on saying e et voilà: You just pronounced the Ö!

Same goes for the Ü, if you’re not lucky enough to be a French or Norwegian who have their normal U/Y pronounced like this: “sur” or “krysset”, you start by saying Iiiiiiiiii and then try to kiss your darling again, so lips go round and tadaaaaa: the Ü is yours.

Ei or ie in German – why do they have to look so similar?!

Well, because Germans want you to pay attention to every little detail of their language. Why else would they put the verb at the end of a sentence and insert about 7643379632 other pieces of information in the sentence before finally getting to the point?!

Anyway, you have to make sure, that you see, if there is an EI, which would be pronounced as the AY is in the English exclamation: “Yay, I finally got it!”

Or if there is an IE, which is a looooong I as in the English word “bee”. In general, Germans love their long and short vowel. Make sure to pay attention to them too, because there is a difference if you talk about “Mett”(minced meat) or “Met”(mead). Especially if you have vegetarian friends, you’d like to be sure what to offer them. The difference may not be as bad as French struggling with English long vowels wanting to go to the “bitch” (beach), but still…

Speak and listen as often as possible. Take advantage of your Lingoda classes: listen to your teachers, ask them to correct you, ask your classmates for advice how they mastered the sound and dare speaking!

If you’d like to practise your language skills with native German speaking teachers, visit the Lingoda website and find your ideal language package. You can have classes with qualified teachers, have access to thousands of resources and take interactive quizzes!