If you’re not in Germany, you may wonder what all the fuss is about. Because fuss there certainly is. From mid April to a hard stop on the 24th of June, white asparagus time is a joyous time here in Germany. And no matter what you do, you can’t escape it.

What is the difference between Spargel and Grüner Spargel?

In English, we refer to asparagus and white asparagus, but it’s the opposite in Germany. Spargel refers to the white asparagus, and Grüner Spargel the less prized green spears. Each stalk of Spargel needs to be harvested by hand, and when you’re talking about an average of 130 thousand tonnes each year, that’s a lot of work.

All over Spargel-growing regions there are Spargelköniginnen, ‘Asparagus Queens’, who support the work of the local growing associations. This isn’t a stand and wave kind of job, but a busy workload over the season attending events and speaking to all sorts of organisations about the importance of the crop. They do wear a tiara and a sash though, to be sure. There are local festivals celebrating the vegetable, including the small town one where I witnessed a relay race involving wheelbarrows, hay bales, aprons, gloves, and of course, taking a shot of Schnapps. I’m pretty sure they’ve been doing this same thing for 400 years.

What would a German obsession be without specific tools? Spargel is no exception. You need a special Spargelschäler, ‘asparagus peeler’, for preparing your white gold without breaking it. Of course, to maintain their beautiful straightness, you need a tall Spargeltopf, ‘asparagus pot’. If you get really into it, you can invest in a Spargelteller, ‘asparagus plate’, with a special drainer built in or grooves to keep the vegetables in place, and Spargelzange, ‘asparagus tongs’ for serving. 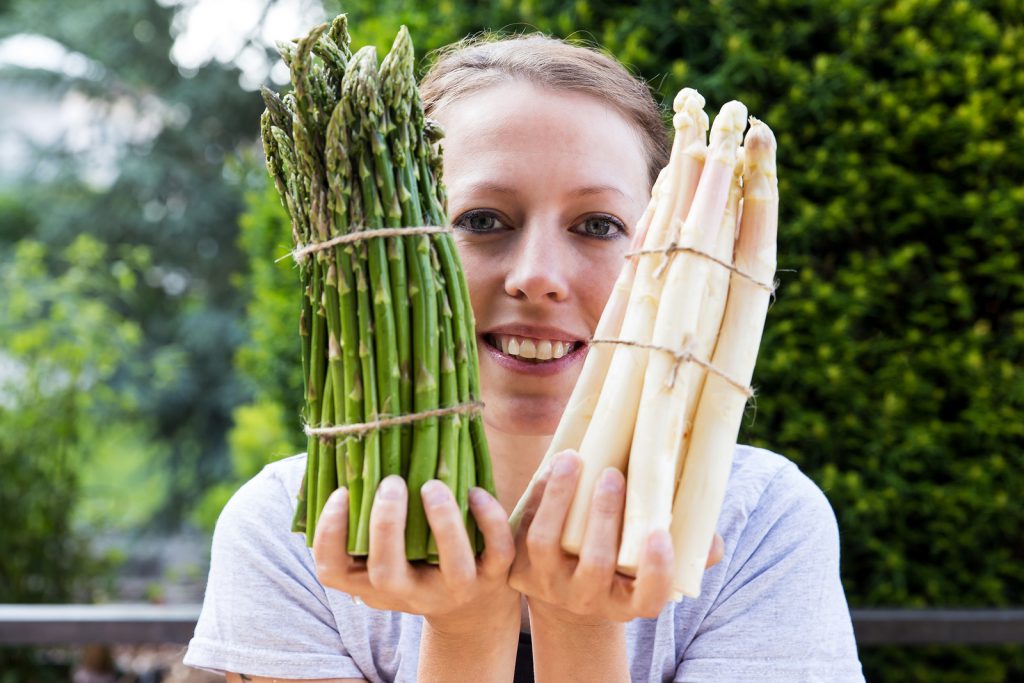 It’s all about beauty

You’ve paid extra for the best-looking Spargel spears, literally called Extra Spargel, the highest grade.  The other kinds go from Handelsklasse I to Handelklasse II, which get thinner and less straight the lower down you go. There is no difference in taste, by the way, this is all a pure asparagus beauty contest. It’s tough digging out those spears from under those humps of dirt, and cutting it neatly with a Spargelmesser, ‘asparagus cutter/knife’, that’s one of the reasons it’s so expensive. If you’re going to make Spargelcremesuppe, ‘asparagus cream soup’, you can buy the cheapest broken spears as you’re going to blend the whole thing anyway.

The traditional way to enjoy Spargel is steamed, with boiled new potatoes, and a side of thinly sliced smoked ham. Often the Spargel and the potatoes are covered with a slick of Hollandaise sauce or melted butter. In the shops, you can even pick up special bags of Spargelkartoffeln, ‘asparagus potatoes’, which are little waxy potatoes to serve with asparagus, rather than tasting like it. I live a few kilometres away from Schwetzingen, the self-proclaimed Spargelstadt, ‘asparagus town’. In every restaurant around during Spargelzeit, you see long tables full of families all ordering a pound of Spargel each, drowning in sauce.

Make a holiday of Spargel season

All around Germany, the farms where they grow Spargel suddenly sprout little huts selling the white spears directly to customers. It’s not uncommon to see folks heading out on their bicycles to pick up a special armful of Spargel for a fancy weekend meal. A group of 140 farms in North Rhine-Westphalia have created a Spargelstrasse route, so you can cruise along the flat countryside enjoying meals at farmhouse restaurants and the white gold only a few metres from where it was picked.

Don’t forget to book a Lingoda class or two in before you head out to buy your Spargel so you can have a little chat at your local roadside hut!

5 TED talks from Germany that you should watch

German separable verbs: How to recognize and use them