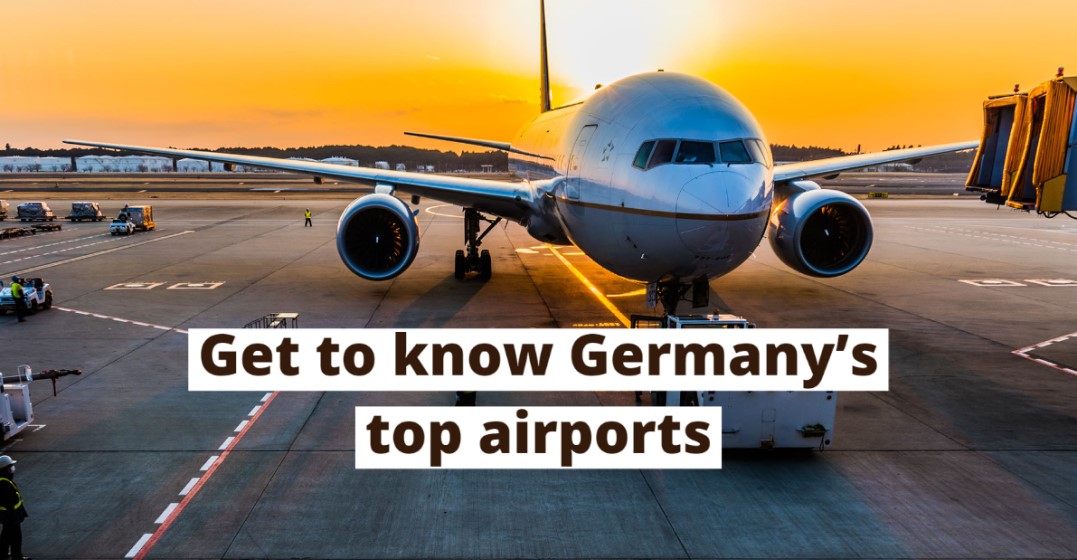 With a population of nearly 84 million and located in the centre of Europe whilst also sharing a border with nine other countries, Germany is a magnet for international travel. Not to mention the number of people travelling within its own fair land. It’s not surprising, then, that Germany has more than twenty international airports, situated all around the country. So if you want to travel north, south, east to west, here is a list of the airports we suggest.

From the international hubs of Frankfurt and Hamburg to the disaster of the new Berlin airport, they all have a story to tell.

The city of Frankfurt is home to the European Central Bank and as such is considered the core of Germany’s financial centre. It is a major international financial hub. Frankfurt am Main airport (Flughafen) is the busiest airport in Germany and holds the mantle of the 4th busiest airport in Europe (after  London Heathrow, Paris-Charles de Gaulle and Amsterdam Airport Schiphol). A true international airport, from here you can fly to more than 300 destinations in 5 continents.

Frankfurt am Main airport was also the central starting point for the activities of the Luftwaffe in World War II. From launching attacks on France to setting up concentration camps close to the airport, to falling under US control in 1945, to later being used in the Soviet Union’s blockade of Western Allies, Frankfurt airport is steeped in history.

Located in the south west of the country, flying to Frankfurt will bring you Germany’s vineyards and close to Luxembourg and the French border.

In the capital of Bavaria, located in the south east of the country you will find Germany’s second busiest airport. Close to the borders of Czech Republic, Austria and Switzerland, Munich is popular for its beer drinking Oktoberfest and its many century old buildings.

The airport itself was named after Franz Josef Strauss, a former Governor of the state of Bavaria, whose involvement in politics in West Germany from the 1950 to the 1980’s was often considered quite controversial. Strauss was an early instigator in the project to build this airport and as such helped to build the aviation industry in Bavaria.

Located in the capital (Hauptstadt) of the Nord Rhine-Westphalia, Düsseldorf airport is the third largest airport in Germany and home to Eurowings, Germany’s low cost airline (Billig-Fluglinien). Situated close to the borders of Netherlands and Belgium, a flight (Flug) to Düsseldorf will take you all along the west coast of Germany.

This busy international airport experienced a tragedy of its own, when in April 1996 a large fire broke out that resulted in the death of seventeen people. To date, this is the worst structural airport fire worldwide.

Not far from Düsseldorf is the international airport (Internationaler Flughafen) of Cologne, which also serves the neighbouring city of Bonn. With Cologne being Germany’s fourth largest city and Bonn the former capital of West Germany, you can expect a large quantity of passengers coming through this airport. It is named after Konrad Adenauer, a native of Cologne and the first post-war Chancellor of West Germany.

This airport holds the title of oldest airport in Germany to still be in operation. Founded in 1911 and located in the north of the country, it was initially used for airship flights. Think Blimps and Zeppelins. By the 1940’s the use of the airship had seriously declined due to the superior abilities of new aircrafts and several tragic accidents.

For journeys to Germany’s northern coastline and a trip over to Denmark, Hamburg is the best centrally located airport to use.

At one point in Berlin’s chequered history there were three airports. Schönefeld in the east, Tegel in the West and Tempelhof in the centre of the city. The latter, one of the first airports in Germany, is no longer in use. While Schönefeld and Tegel are still in operation, they are considered completely over capacity and insufficient for the numbers that fly in and out of Berlin.

Plans have been in the works for nearly 30 years to build a new airport in Berlin. It was 15 years before they finally broke ground in 2006 on The Berlin Brandenburg airport. However, it has been mired in controversy and delays since the beginning. While hopes and intentions were set to see the airport being opened this October 2020, the current pandemic has laid claim to those plans.

For now, if you want to fly to Berlin you have two choices. And while they wouldn’t be the prettiest or the biggest of airports in the world, they are quite centrally located and well serviced by Germany’s excellent transport system.

Some German words to look out for at the airport

Prep for your next trip to Germany by getting to grips with the language. Visit the Lingoda website and sign up for your free 7-day trial with our qualified teachers today!