The unique culture of rural America

Born and raised in Joseph, Oregon, a town of 2000 people, there is no doubt that urban and rural America are vastly different. But not only that, the rural USA has a culture that I’ve experienced no where else. While I live in the much larger city of Hamburg, Germany now, the wide open spaces of my home town is something that I will always keep near and dear to my heart.

The major difference between urban and rural USA

After travelling across nearly all US states, 35 countries around the globe, and living abroad over the past 5 years, I’ve come to realise that there are two common ideas about the US: the rural Wild West of John Wayne and the high-tech, star-studded landscape of California. And in a way, both are true.

The US spans across 9.834 million km². To put things into perspective, it takes me longer to drive from the east to west in just the state of Oregon than it does for me to drive across the whole of Germany.

Because this space is so vast, there are major differences even within one state. Even still, those differences can be summarised into one core concept: slow vs. fast. As you can imagine, urban America focuses on developing quickly: tech advances, start ups, and continuous innovation. You’ve heard the spiel from Elon Musk. But in rural America, we’d like to keep things at a stand still: fishing trips in the summer, country music (I’m talking Johnny Cash style), 3 month long road trips in camper vans, and a life of simplicity.

In order to understand why rural areas are so slow to change, we can take a look back into history. The US is a really young country and developed long after the cities in Europe. In 1790, 70% of the population lived in rural areas. But in 2017 that number fell to only 15%. Despite the fact that everyone moved to the city, the size of the US remained the same, which made rural areas even more “rural”.

Those who stayed did so because they preferred that way of life – a life that involves nature, safety, and ample amount of time with close friends and family. My family is a perfect example. Even though both sides immigrated from Europe pre-WWI, they settled in rural areas and have remained there ever since.

I grew up as a farm kid. Not only did my parents buy a house out of town surrounded by a cow field, both my grandparents owned many horses. For every person in my hometown, there are at least 10 animals (my own estimated statistic). In every direction, there were fields with crops of some sort, especially wheat. Whenever it rained, the smell of wet hay filled the air. I especially loved the farms that bred horses, because you could see the new babies every spring. My first job was cleaning out horse stalls and changing sprinkler pipes at my neighbour’s house. My parents grew up in a similar environment and their parents before them, and so on.

Yes, we do wear cowboy hats and cowboy boots. In fact, you’re not a real cowboy if you don’t wear cowboy boots even when you’re not riding horses. I started riding horses when I was 3 years old and was training horses as a young teenager. I even rode my first horse, Little Red, to my first job. After all, it’s far more enjoyable to go down dirt roads on a horse than it is in a car.

In the summer, a rodeo known as Chief Joseph Days was the biggest event of our little town of Joseph. People flocked to the stands in the thousands to watch bull riding, barrel racing, and even children compete for chickens (I once participated in a chicken race as a child and am still upset that another girl beat me to the largest one).

On another note, John Wayne is basically one of our most beloved celebrities. 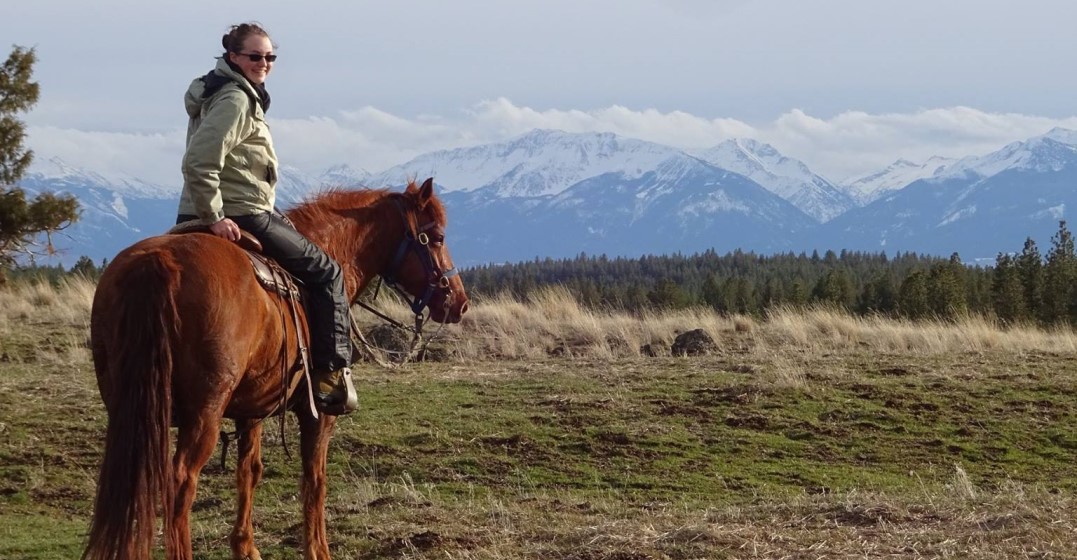 When I graduated from high school and moved to Portland for my Bachelor’s Degree, I started to realize how differently we speak in rural communities. We have our own terms for things and even a bit of a different accent. For example, we don’t say “creek” with the “ee” but say it more like “crik” with the “ik”. Although I’ve lost a lot of that now, I am sometimes jealous of people from states like Texas that proudly maintain their accents, even from abroad.

If the vastness of the city hasn’t drawn you in and you decide to permanently settle or remain in rural America, you also develop a lot of pride for that place. We even refer to people who do this as “townies”, meaning you stay in town and never get out. I think this also comes back to the concept of family traditions. My grandparents still grow a lot of their own produce and taught me how to fish and pick forest mushrooms. My grandpa in particular spent a lot of time teaching me how to survive in the wilderness during our long camping trips in the mountains on horse-back.

Looking back now and after hearing stories of others (like my partner who grew up in the massive and chaotic city of Istanbul), I realise that having this childhood was a rare and beautiful opportunity that most children now don’t have. I never heard the honking of a morning commute or the loud city construction that begins on Monday at 6am. It was peaceful with the sound of crickets chirping and a view of the Milky Way that city kids can hardly dream of.

Even though I did decide to leave, like my family and other residents, I too hope that it never changes.

If you’d like to learn more about American culture and the English language, visit the Lingoda website and sign up for your free 7=day trial with our native speaking teachers today.