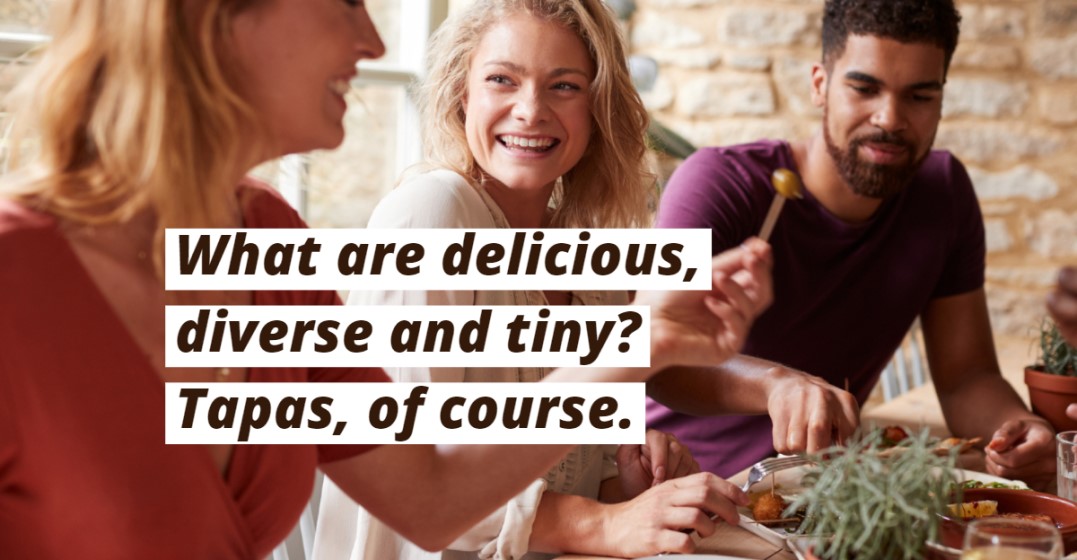 There’s no denying that tapas have taken over the world. Wherever you go, you may find Greek tapas, Japanese tapas, Thai tapas or Mexican tapas. But today, we talk about the original ones. Oh yes…we’re talking about the exciting lands of paso doble, Picasso and Casa de Papel. The one that never fails to make our hearts beat faster.

Stay put as we walk you through the incredible world of Spanish tapas and their origins. One thing is for sure… your culinary experience will never be the same again!

What are tapas and what makes them tapas?

Some people get confused about tapas because they assume they’re a type of food.

Actually, they are not about the ingredients as much as they are about the size. In the end, regardless of what is actually served, tapas are small portions of food served in small dishes, which are sometimes made of clay. In Spain, they are also expected to accompany some type of alcoholic drink, such as red wine or sangría!

If tapas are small portions of food, it isn’t hard to see why they could be almost anything depending on where you go. Different regions of Spain will have different ways of serving them and eating them, not to mention ingredients also vary a lot.

Here are some examples of tapas you need to try if you’d like to get closer to Spanish cuisine: 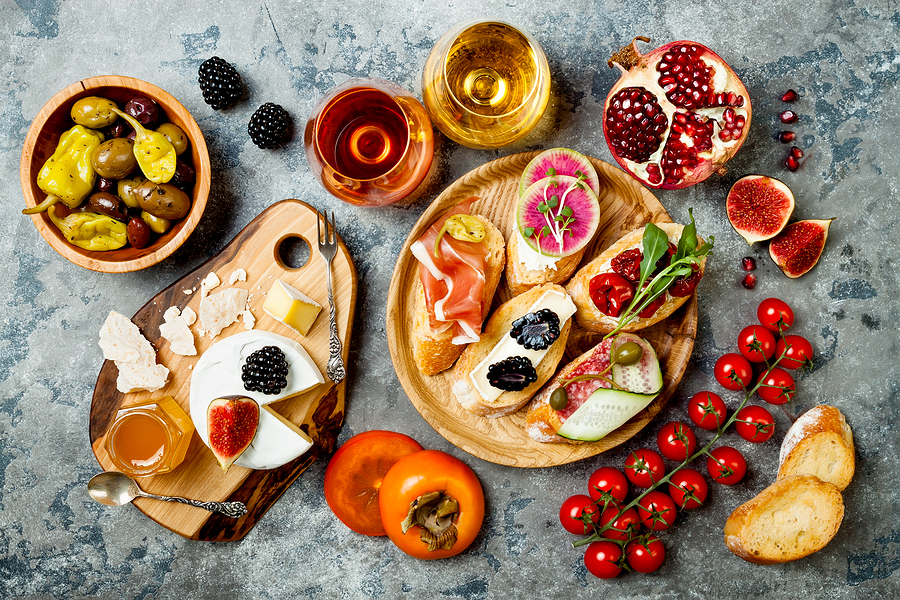 Are tapas the same as appetizers?

Not exactly. Tapas have quite a flexible role in Spanish culture and vary according to region and personal routine. While some see it as a snack before a late lunch or dinner – and Spaniards are famous for eating late in comparison to the rest of Europe – others see them as appetizers, and many more see them as a whole meal in their own right. After all, it’s perfectly possible to be full with a combination of five or six tapas!

What happens in a tapas bar or restaurant?

Visit Spain and you’ll realize tapas are everywhere – cafés, bars and restaurants – and are served from morning to night. In the vast majority of the country you are expected to pay for tapas as for any other dish. Most menus either have an entire section for tapas or offer tapa-sized versions of dishes. Make sure you pay attention to prices, as tapas can either be very cheap or extremely expensive depending on the ingredients included. Good news – in older, traditional restaurants in Madrid and Granada, you might get free tapas included with your drink!

If you thought food and language were completely unrelated, think again – the habit of eating tapas is so deeply ingrained in Spanish culture that there are several expressions related to the tradition! Here are some useful ones:

Fact or myth? The incredible origins of tapas

Spain has given us some epic tales of kings and queens, and the history of tapas is no different. While their origins aren’t certain, there are some traditions we’d like to share with you. Like what? Well, about how tapas came to exist and why they are commonly served with drinks, in small portions and with such rituals surrounding them!

Important to know before we begin: the word “tapa” actually means “cover” or “lid”, which is why so many of these theories include covering glasses with food!

Some say the tradition of tapas began at a time when hygiene was horrible to say the least – the Middle Ages. Whenever the weather was hot in Seville, flies would reproduce uncontrollably and take over taverns and bars. For this reason, bartenders would often use a saucer to cover customers’ glasses of wine, and thus keep flies away from the drink and preserve its aroma. As time went on, bartenders would have noticed this could be an attractive service upgrade in their marketing strategy, so they started serving small snacks on top of the saucers: olives, cheese, ham, and so on. Customers loved the idea and tapas were born!

The Wise One theory

13th century. Alfonso X of Castille, known by Spaniards as “el Sabio” (the Wise One), falls ill. In order to recover, he is told to drink lots of wine, but since he wanted to avoid getting drunk easily, he decided to eat something in very small portions along with the drink. The combination pleased him so much and helped him improve so rapidly, that he decreed all alcoholic beverages should be served with small snacks in taverns across the kingdom. Some claim this was also a strategic decision from his part to help control erratic or aggressive behavior by drunk sailors in public places. Wise, indeed!

You are probably aware of how hot the weather can get in Spain during summer. Just like the ritual of siesta (napping), which is thought to have had its origins in the need for farmers to rest during hot days, tapas could also have their origins in farmers’ lifestyle during the 19th century. See, farmers couldn’t afford to feel sleepy and lazy after a heavy meal. Instead, it is said they started choosing smaller, lighter meals accompanied by a glass of wine to give them some energy to work on the fields. Deliciousness and energy without the need for sleep!

In the 19th century, king Alfonso XIII once visited a restaurant called Ventorrillo El Chato, which still exists today in the southern city of Cadiz. As the king chose to sit outside, it got very windy and the innkeeper took the initiative to cover the king’s glass of wine with a slice of ham to stop the dust from getting in the drink. The king ate it and liked it so much, he asked for another one. But rather than asking for another “slice of ham”, it is said he asked for another “cover/lid” (tapa) and set a new trend!

In 1915, Manuel Ruiz Romero, who was the wealthy owner of a castle in Xaém, went to the local casino with his friends and decided to order drinks from the nearby bar. But he wasn’t just going to drink something that had been exposed to wind, dust and other unpleasant things. For that reason, Manuel advised the carrier who was bringing him the drinks to cover the glasses with slices of ham. The following day, he requested the same thing, but this time asked the messenger to cover the drinks with cheese. Legend says that the third day, the drink carrier shamelessly turned to Manuel and asked: “And today, what should I use as a lid (tapa)?”

Have you ever tried Spanish tapas? What did you think and which ones did you go for? Let us know what you think about their curious origins!

Also, if you’re a Spanish enthusiast and can’t wait to learn more, we invite you to read our stories about how to learn authentic Spanish before visiting the country, what songs in Spanish are worth adding to your playlist, and the best cities to learn Spanish in Spain!