How to Tell the Time in German

German punctuality is a thing. In order to be punctual like the Germans, you have to be able to tell the time in German. This skill also allows you to schedule appointments, read timetables, and understand German references to time. We’ll tell you all about the regular and peculiar ways to tell time in German, so let’s waste no time and dive right in!

Asking for the time in German

Germans use two different questions for asking for the time: “Wie viel Uhr ist es?” (“What time is it?” and “Wie spät ist es?” (literally “How late is it?”). Similarly to English, the most simple answer is to state “It is…” followed by the hour:

For the full hour, the Germans put the word “Uhr” (“clock”) at the end. Notice the third example above and beware that Germany uses the 24-hour system. For any hour greater than 12 you subtract 12 to arrive at the p.m. time.

Telling the exact time in German

For a starter, that wasn’t so bad, was it? Now, chances are it will hardly ever be the full hour when you ask or tell the time. Germans like to be precise! To tell the exact time down to the minute, you state the hour and then tag on the minutes:

Note that the word “Uhr” appears in the middle between the hour and the minutes, not at the end. For telling the exact time, you have to know your numbers well, at least up to sixty!

Time in relation to the full hour

Congratulations, with all the above examples, you’re already able to tell every possible time in German! But as with English, German has more ways to state the time, and it’s important to understand these as well. It is very common to refer to the full hour with before and after, “vor” and “nach” as follows:

Pay attention to the p.m. hours: you can drop “Uhr” for the morning hours, but not in the afternoon. Saying “dreizehn” instead of the full “dreizehn Uhr” (one p.m.) sounds odd. However, the minutes are optional. Both “fünf vor fünf” (five to five) and “fünf Minuten vor fünf” (five minutes to five) are fine.

Now, just like in English, the German language divides the hour like a pie into quarters and halves using “Viertel” and “halb” – which commonly substitute the minutes 15, 30, and 45:

The main difference here is that Germans don’t use “half past” – instead they halve the next hour! “Halb neun” literally means halfway there to nine, so it’s eight thirty, or half past eight. 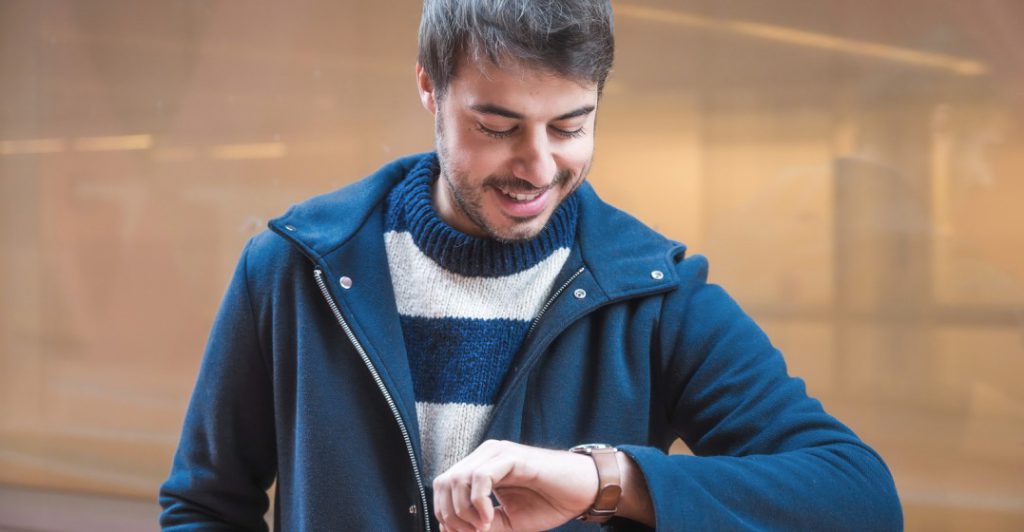 Sometimes, even the Germans won’t tell the exact time or set a rather flexible meeting time. If it’s just before or after a specific time, you can say so using “kurz” (shortly):

To set a meeting at a precise time, you’d say “um” (at). If you want to be deliberately vague, you can say “gegen” (round, literally “going on”, though it can also mean after, not just before).

If it was 5:29 and someone asked you for the time, you’d probably just round it up and say it was 5:30, or half past five, correct? Well, so do the Germans, but they’ll let you know about it using “kurz”:

Note that there is no official verdict on just how short a time span “kurz” specifies, but as a rule of thumb, use it for anywhere between one and five minutes. By the way, the Germans seem obsessed with the five minutes before and after the half hour:

Speaking of past, check out How Do Germans Talk About the Past?

Peculiarities of telling the time in German

Is your head spinning yet? Not to confuse you, but here are some more peculiarities the Germans have when telling time:

Wrap your head around that! It appears just as complicated as the long composite words in German.

If you’d like to practise your German speaking skills, visit the Lingoda website and sign up for your free 7-day trial with our native speaking teachers today!