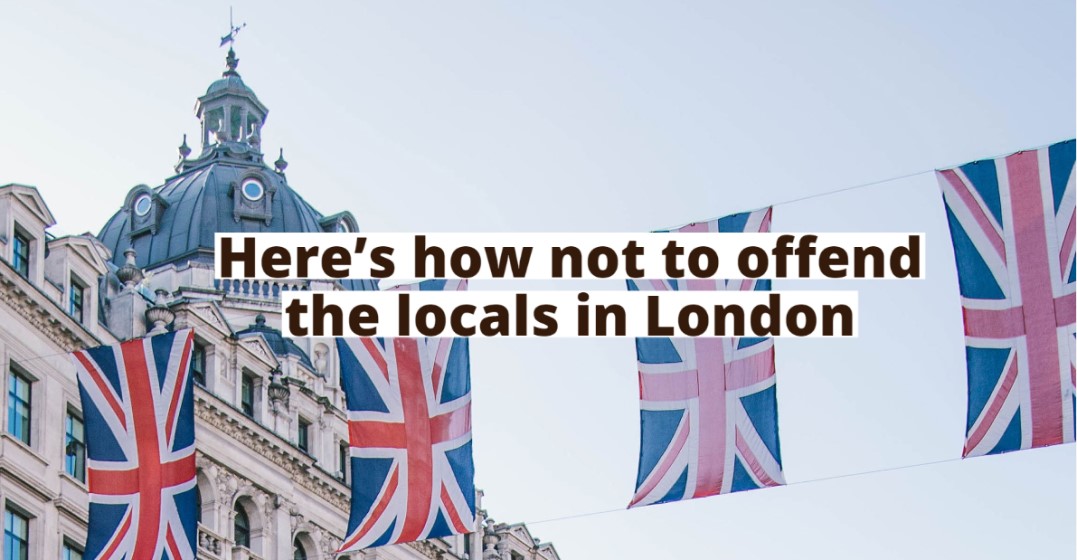 You would think, as an English native speaker, and resident of a Commonwealth country (Canada still sports The Queen on our money and her portrait appears at the post office), I would have found my move to London easy peasy lemon squeezy. Well, apparently my steady diet of British children’s TV shows throughout our early years didn’t prepare me entirely for this culture shift. Learn from my mistakes and don’t do these five things!

Five things you should not do in London

If you’ve been to the United Kingdom, you know there is no such thing as an ‘English accent’. There are hundreds of regional accents, varying so much in vocabulary and speech patterns, you could call them dialects. People who grew up only 20km apart will have quite different accents, and probably a distinct set of words for baked goods too. Among these accents there are big class markers as well, which any British person can spot within a sentence or two. To a non-UK resident, a harmless-seeming question about someone’s accent can bring up a load of emotions about being teased about their way of speaking, or even losing out on jobs. I accidentally offended a few people before I figured this out.

2. Wait for table service at the pub

You will be there a long time, otherwise known as forever. In North America and lots of areas in Europe, one generally sits down and waits for someone to come over. In the UK, you have to go over to the bar and order, then bring over your drinks yourself. If you’d like food, you do the same, and either point out where you’re sitting or bring back something with a big number on it. The second important rule to remember, is people buy drinks in rounds. This means, if you go to the pub with other people, you do not go up to the bar and order your own drink by yourself. Someone will volunteer to ‘get the first round in’, and then you tell them what you want. They pay, and then you are responsible for getting everyone else’s drinks another time. Top tip: be first or second to get your round in, that way you can leave after a couple of drinks if you want, without looking dodgy trying to leave without paying your share.

English is well known for having a lot of different words that technically mean the same thing. The British love to use this to their advantage, engaging in what they call ‘friendly banter’ – essentially seeing how witty you can be in any given interaction. This can involve silly unusual words for things, using slightly inappropriate language, being overly friendly, and making jokes. This is really hard to manage if English isn’t your first language, and honestly, even if it is, it takes practice to hit the right tone. Don’t attempt this until you’re really comfortable with it. Smiling and sharing a bit of a laugh is nearly always appropriate.

4. Get offended about probing questions about your postcode

This is another British class signifier. The way it usually works is this: you’re at a pub with some people from work, and probably people they know from other workplaces. You’re chatting with someone politely, and they will then ask you if it takes you a long time to get into work. They’re not looking for the details of your commute and how much your rent is, like a German colleague, but probing to see what part of town you live in. This will tell them what kind of salary you make, and how you see yourself. People in London pick their neighbourhoods very carefully, and each postcode has a distinction to it. E1? Oh that’s close to The City, but quite cool, though it has some dodgy edges to it. W2, ah yes, quite posh and expensive. W13? A bit far out, getting into Zone 2 now and unless you own a house out there and have kids, it’s pretty boring. N1? Oh do you work at the BBC or The Guardian?

5. Ask where people went to school

This is a tricky one because it also ties into class issues. You can definitely ask what someone studied at school, that’s a safe way to find out more about someone if that’s your goal. However asking where they went to school is pretty much asking what their parents’ incomes were when they were growing up. It has that much weight to it. So if you can avoid asking this question, it’s best to steer clear.

So just remember in London you need to: buy the second round at the pub, don’t ask anyone about their accents or where they went to school, and you’ll be fine! Don’t worry, you can complain about the weather for a good 10 minutes and everyone take part.

Get ready for London

Start prepping and practising your English before you head off to the big smoke with Lingoda’s free 7-day trial!