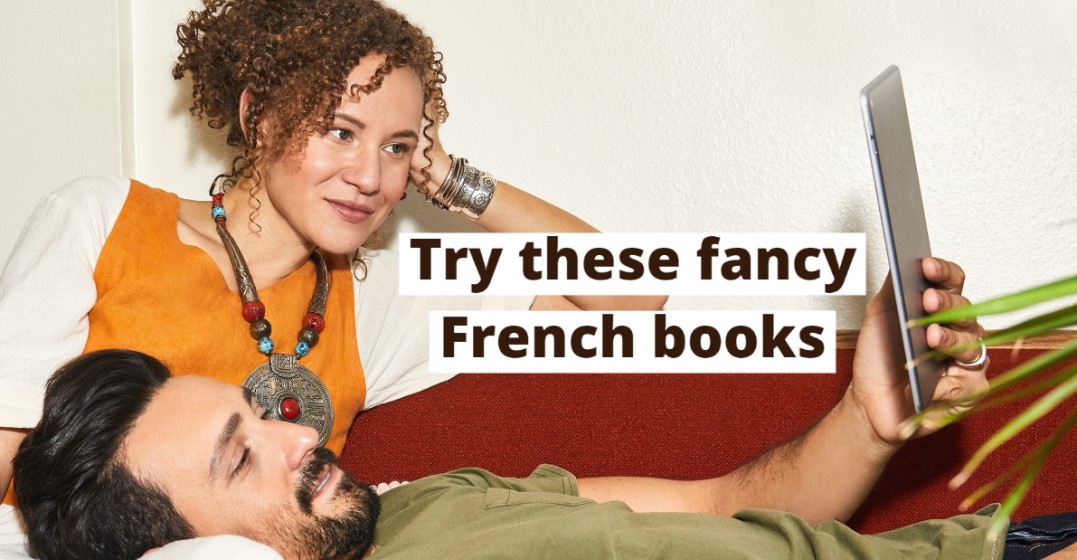 You have started learning French and you want to boost your progress? Why not consider reading French books? But beware, not just any books! Here are a few books French speaker, Audrey, recommends.

When you read a book in a foreign language, you have to try to understand the overall story, the characters, the action. The idea is not to get discouraged from the very first pages of the book.

It reminds me of when I wanted to learn the guitar. The friend who helped me out started playing Johnny B. Goode’s solo and that was enough to put me off and never touch my guitar again.

That’s why I advise you not to read Le petit Nicolas (which is praised everywhere): he’s a lovely boy, but he uses a lot of expressions of children of his time and like a little child who learns at school, he doesn’t speak French very well and so he could mislead you.

The same goes for Charles Perrault’s tales. In the original version, nowadays, even French children find it difficult to understand them. The fault lies in the verb tense used: the simple past tense, which is studied very little in French classes because it is never used in everyday life.

Another pitfall to avoid; you read in French on one page, and there, one word resists you. You turn your head to the next page and look for the word in your language (which is not necessarily on the line opposite), then you come back to French, then you come across a difficult word, etc… Until you get a stiff neck!

If you’re not afraid of a stiff neck, you’ll find a lot of bilingual books , free and online.

Otherwise, I advise you to use partially bilingual versions where only the keywords are translated, or explained in Molière’s language. If you like the short stories of Edgar Allan Poe, you’ll probably like Les nouvelles fantastiques of Guy de Maupassant. You will find one of them, le Horla, in a bilingual version, totally free, where you only have to click on the sentence to discover the English translation. This time, it’s guaranteed to be torticollis-free!

Read French books according to your level

Do you know your level in French? Well, many books have been specially written for each level of the CEFR. In addition to the classics that have been reduced and adapted in this collection, there are authors from all over the French-speaking world who have participated in this collection: these are novels written with words for each level (from A1 to B2), and you even have audio to practice your listening comprehension and pronunciation. You will be able to discover famous French personalities such as Jules Verne, Marie Curie, Victor Hugo, or read completely new stories.

When you start reading a book in a foreign language, any support is good to take. Use all your senses! Of course, reading a French book will be easier if you have seen the film before. You will be able to make comparisons and above all learn a little more about the characters or the plot because the film inevitably makes choices and cuts out certain parts of the story.

In addition to the classics of French literature, take a look at more recent novels such as those by Éric-Emmanuel Schmitt. I recommend two in particular (both adapted to the cinema):

It is well known that the French and Belgians have developed their creativity in a medium other than the classic novel. They also excel in B.D., la bande dessinée (comic books). You probably know Asterix et Obélix or Tintin. These are must-haves. But comics are increasingly aimed at adults. The latest big hit in the bookstores I recommend is Marion Montaigne’s Dans la combi de Thomas Pesquet. She explains with great humour how Thomas Pesquet became a French astronaut.

Finally, if you like poetry, some will be easier to read than others. I advise you to read and see Calligrammes by Guillaume Apollinaire: these are poems whose graphic arrangement on the page forms a drawing, usually related to the subject of the text.

And don’t forget that as a reader you have every right: the right not to finish a book, to skip pages, to read whatever you want, to read anywhere and anytime… So let yourself be tempted by reading in French!

Visit the Lingoda website and sign up for your free 7-day trial with our native French speaking teachers today! You’ll be reading French classics in no time.