Best and Easiest Way to Roll Your R in Spanish
by Alison Maciejewski
April 16, 2020 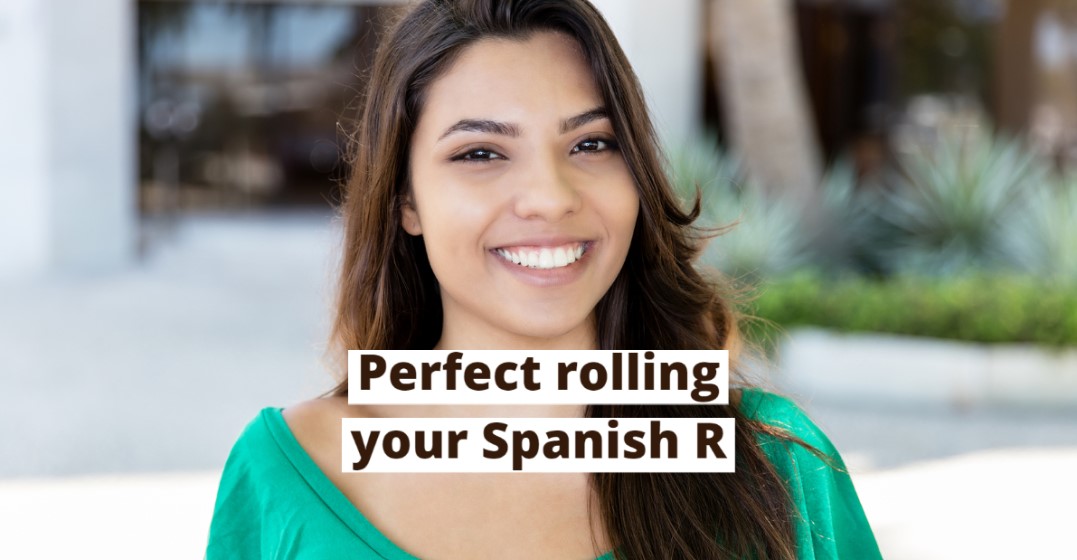 Rolling your R in Spanish seems impossible to some. Language learners name it as one of the most difficult pronunciation issues when learning Spanish. Some people even believe the ability is genetic. Just like making the rolled-up taco tongue; some people can do it from birth and others just can’t. Not true!

Can you roll your R in Spanish?

The truth is that rolling your R in Spanish is not a genetic ability. It’s not a trick of any sort. It is a linguistic ability that millions of people around the world have. A skill they had to learn. It might be easier to learn as a child, but any adult can train their tongue to roll the R.

Think of rolling your R like exercise. Just like building abdominal muscles after years of avoiding crunches, you need to train your tongue muscle in a new way. A six-pack is not built in a day. With consistent practice and dedication, it will happen. Remember: 534 million people who speak Spanish on this planet can roll their R. You can learn to do it too!

When it comes to Lingoda online Spanish learning, we already talked about how to develop a Spanish accent. We mentioned that the most important way to begin correct pronunciation is to ignore English pronunciation rules. Let’s learn how the Spanish R sounds first. This way we will know when to roll it and when not to. This first exercise is all about training your ear to hear Spanish correctly.

The Spanish R makes two noises: The rolled or ‘trilled’ R and the single r. The rolled R occurs when there are two RRs in a row (arriba – aRRiba) or one R at the beginning of a word (rincón – RRincón). The single R anywhere else sounds like the English /d/ noise. Single R is just a tap of the tongue. Amor (love) is pronounced /a-mod/. Combination word raro is pronounced /RRa-do/.

Listen to the video clips from our post about celebrities who speak Spanish. As they speak, identify the difference between rolled RR and single r. When you hear two distinct noises, you are halfway through your training.

How to Roll Your R in Spanish: The Beginner’s Guide

After your ear is properly trained, it’s time to train your mouth. A trill is not tapping your tongue very fast. That is physically impossible. A trill is a vibration of the mouth. Most of us already know how to trill our lips, so let’s start there.

We trill our lips when we shiver and say “BRRR, it’s cold in here!” Little children trill their lips to make the engine noise from an airplane or motor boat. Make big raspberry lips and push air from your lungs to make your lips vibrate. Understand this feeling and you have a good idea of what a tongue trill should feel like. It doesn’t involve trying hard. It is physics and biology. It should feel effortless.

The rolled Spanish R is technically called an “apical-alveolar trill”. This linguistics term explains the rolling sound comes from the apex of the tongue making contact with the alveolar ridge inside your mouth. This ridge is the small, hard shelf between your top teeth and the roof of your mouth. Do you feel it?

Now attempt to trill your tongue at this location. Some children make this noise when they point their fingers to mimic a play machine gun firing /du-du-du-du-du/. Concentrate on forcing air out past the tip of your tongue. If you spend several days on these exercises, you will be rolling your R in no time.

Why Rolling the R is Important

You know how the ‘lisped’ z in Spanish is the audible difference between casar to get married and cazar to hunt? This is why rolling the R is important in Spanish. It changes the whole meaning of the word.

Take the word pero. Pronounced with a single R, pero means “but”. Me gusta comer, pero no tengo hambre. I like to eat, but I am not hungry. Pronounced with a rolled R, perro means “dog”. Me gusta comer peRRo. No tengo hambre. I like to eat dog. I am not hungry. Not the kind of mistake you want to make. Are you ready to practice with a native Spanish speaker?

If you’d like to improve your Spanish accent, head over to the Lingoda website and sign up for your free 7-day trial with our native speaking teachers today!