Do you have trouble with these adverbs of frequency?

If you’re like most English language learners, you probably don’t enjoy learning grammar. On the other hand, you probably also don’t like the idea of making basic grammar mistakes.

The truth is that English grammar is a source of constant frustration for many learners and the rules regarding adverbs are no exception.

How do you know you’re using them correctly?

Where do they go in a sentence?

Will native speakers still understand you if you get confused and mess up?

Don’t worry. We’ve got a few tips to help you out.

You know what an adverb is, but what exactly is an adverb of frequency?

Basically, these kinds of adverbs are used to answer the question “How often?”

For example, if your teacher asks, “How often do you practise speaking English at home?” you could simply list off all the days you practised, but that could end up being a pretty long list.

An easier, and more common, way to answer is by using an adverb.

What are definite adverbs of frequency?

Definite adverbs include words such as: daily, annually, once a week, once, twice, every day. They’re used to answer the question of “How often?” in a more specific way.

For example, you might answer the question, “How often do you practise speaking English at home?” by saying, “I practise every day” or “I practise twice a week.”

These are easy to use since they always go at the beginning or end of a sentence.

You can also use days of the week as definite adverbs of frequency. For example, “On Sundays, I go for a walk” or “Every Saturday, I visit my parents.”

Indefinite adverbs of frequency are a little more complicated, but you’ll probably hear them used a lot.

These include words such as: always, constantly, usually, a lot, normally, frequently, regularly, often, sometimes, occasionally, infrequently, rarely, seldom, hardly ever, and never. 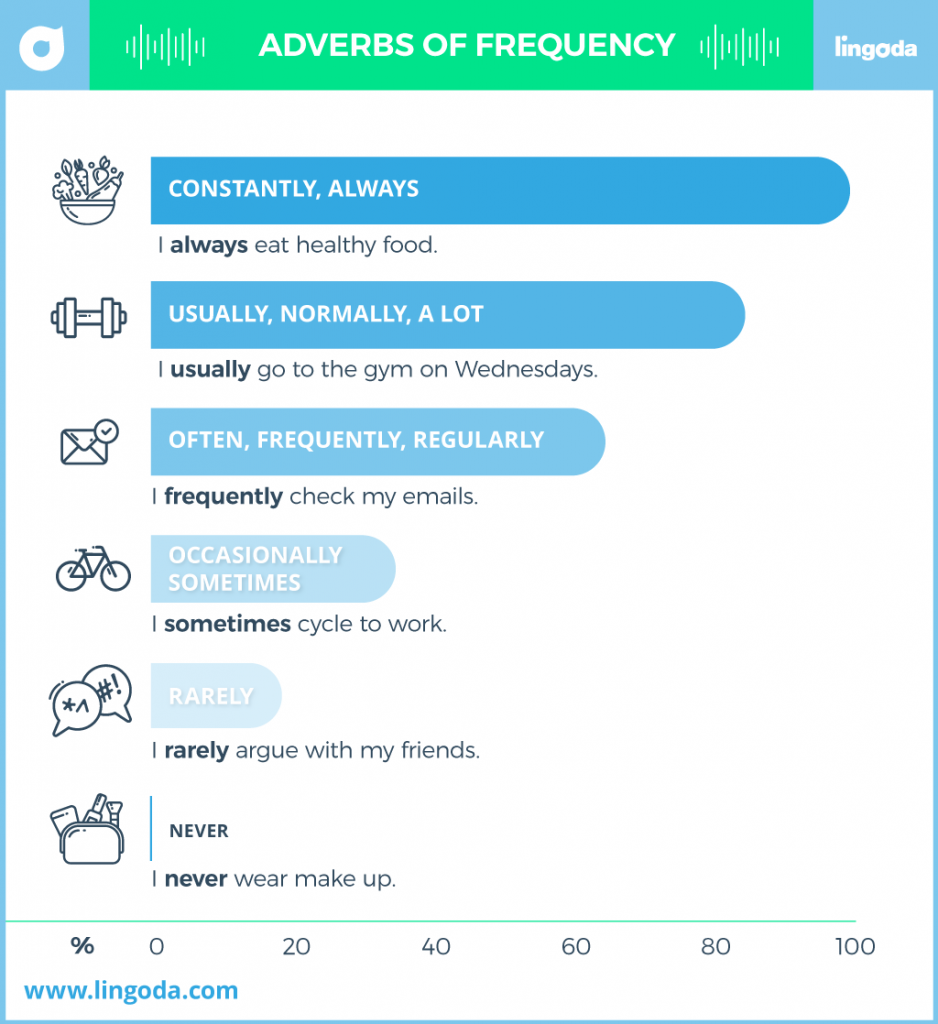 Where do they go in a sentence?

That’s where it gets complicated.

Indefinite adverbs of frequency usually come before the main verb, as with the sentence, “She constantly looks at her phone.”

Whenever there’s a sentence with a helping, or auxiliary, verb, the adverb goes before the main verb. For example, “He has never been late for work.”

Except the verb be

The verb be is one exception to this rule. Adverbs usually come after the verb be in a sentence. For instance, “My teacher is always punctual.”

First or last in a sentence?

Most adverbs of frequency can also go at the end of a sentence, as in, “David travels frequently.”

However, the words always, rarely, and seldom cannot go at the end of a sentence.

If you want to use an adverb of frequency in the negative form, simply put the adverb before main verb as usual: “She doesn’t usually cook.”

Just be sure not to use negative adverbs, such as rarely, seldom, and never, in a negative sentence.

As with any grammar rule, keep in mind that you might come across a few exceptions. However, by following these easy guidelines, you should have no trouble learning to use adverbs with confidence. As always, the most important thing is to keep practising.  Try a Lingoda lesson today and put the theory into practice!