What you should know before visiting Canada 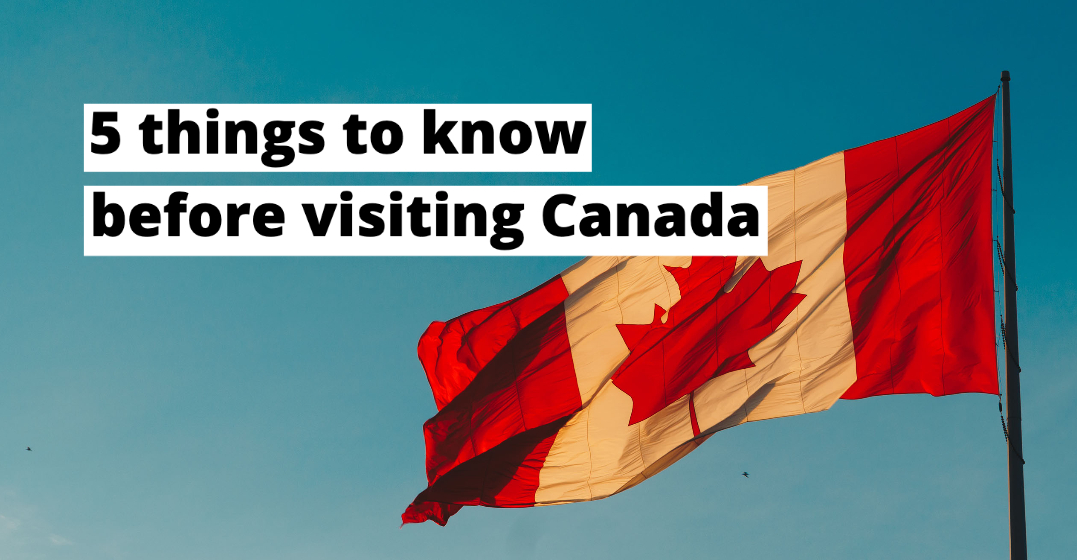 There’s nothing worse than arriving in a new place and feeling completely clueless about what to do and how to act. Before you visit any country, you should do some research so you know what to expect. Planning a trip to Canada? To make sure your trip goes as smoothly as possible, check out this list of things you should know before visiting the Great White North!

Picture this: It’s your first time in a Canadian restaurant, and you’ve just finished a nice meal. When it comes time to pay, you see your Canadian friends calculating how much to tip the server. The service was okay, but it wasn’t great.

Why is everyone so eager to tip?

You see, Canada is a country with a strong tipping culture. It actually has very little to do with good or bad service. You’re not required to tip, but it’s expected that you will. You’ll even notice that when you’re handed a debit or credit machine to pay, there’s a screen that automatically asks you how much you want to tip—a minimum of 15% is standard. If you’re dining with a group and you choose not to tip, beware: They’ll probably be annoyed with you! Your friends will likely feel obligated to pay the part of the tip that you didn’t cover.

2. Queuing up is a big deal

Canadians love lining up! Canada is a country that takes lining up (or “queueing,” as it’s known in some other countries) very seriously. To wait patiently in an orderly fashion is not only seen as good manners, but also a way to keep things organised and fair. If you’re trying to take a bus, get into a popular club or restaurant, or buy tickets for a concert, you’d better go to the back of that line. If you try to “jump” the line (stand in front of people who have been in line longer than you) you’ll get a lot of angry looks!

In many countries in the world, rules around alcohol are relaxed and flexible. Canada is not one of those places. Rules are rules and you’d better follow them! The first thing you should know is that the drinking age in Canada is either 18 or 19, depending on the province. You’ll need to make sure you have your photo I.D. available to prove your age.

Once you’ve shown your I.D. and got that liquor, you might want to go to a nice park and have a drink. Or maybe you’d like to crack open a can of beer and stroll through the streets. Well, think again! In the majority of places in Canada (with some specific exceptions in Québec), drinking in public is illegal and you will be fined. Even if you’re trying to quietly enjoy a glass of wine on the beach, there’s a chance a police officer will confiscate your bottle and pour it out!

Many tourists in Canada have big plans for all the landmarks they’re going to visit: They’ll start by skiing Whistler, check out the dinosaur fossils in Drumheller, head over to Yellowknife to see the Northern Lights, maybe check out Niagara Falls, and end by soaking up some French-Canadian culture in Québec.

Many don’t realise the size of Canada makes travel plans time-consuming and costly. Canada is so big that the country stretches over six time zones. If you’re in Vancouver and want to get to Montréal, you’re looking at a five-hour flight. Going by car will take over four days if you drive 10 hours a day! And if you do decide to drive in Canada, make sure you’re aware of the weather conditions. Driving through certain parts of the country, particularly in winter, can be incredibly dangerous.

You’re down to your last $50 and you find an amazing souvenir for $49.99. Sounds perfect, doesn’t it? Well, we have bad news for you: You can’t afford it. Why? Thanks to sales tax, of course!

On top of the 5% sales tax that’s charged across the country (GST), provinces charge varying amounts of provincial sales tax. The frustrating thing is that it isn’t included in the price of an item—you always have to be prepared to pay extra.

So, now you know all our secret tips about Canada! Keep these tips in mind on your trip to Canada and won’t have any unwelcome surprises.

If you’re planning a trip to see Canada in all its glory, you may want to brush up on your English or  French skills. Visit the Lingoda website and sign up for your free 7-day trial today! You can choose the topics you want to cover to prepare you for your next adventure.