What are the Languages Spoken in Switzerland? Switzerland has not one, but four national languages: German, French, Italian, and Romansh. The latter doesn’t share the equal status of the other three as one of the official languages. English is also not an official language in Switzerland, but can serve as a bridge as a common language. Official documentation is often available in English as well. Immigrants also brought a number of languages into the country. So what are the languages spoken in Switzerland?

The national languages of Switzerland

Apart from the official status, all four national languages can by right be used to address the federal assembly. German, French, and Italian are the most widely spoken languages with about 63 percent, 23 percent, and 8 percent, respectively, whereas just about 1 percent of the population speak Romansh.

The four national languages of Switzerland by population (source).

There are roughly 4.4 million speakers of German in Switzerland. However, they commonly use a dialect for communication: Swiss German, which is further divided into many regional dialects. Because of this, no official written form of Swiss German exists and the Swiss use standard German (High German) for writing.

About 11 percent of the population or around 950,000 Swiss speak High German at home, but many of them are immigrants from Austria and of course Germany. Standard German is the first foreign language Swiss Germans learn in school.

Swiss German is the most dominant language in the cities of Zurich and Bern, which are the largest city and the country’s de facto capital, respectively, though Bern has French as an official language.

French speakers make up around 22 percent of the Swiss population, or about 1.5 million residents. Unlike Swiss German with its many dialects, the standard Swiss French and French as it’s spoken in France are very similar with minor differences. French in Switzerland tends to have a slower pace, a different accent, variants and variations for words and phrases, and a unique antique quality.

The Swiss cantons of Geneva, Jura, Vaud and Neuchâtel speak French exclusively, whereas Fribourg/Freiburg, Berne/Bern, Valais/Wallis, and parts of Basel/Bâle are bilingual cantons with Swiss German as the other language.

The name for the French-speaking part of the country is Romandy. It’s not a political term but rather a way of uniting citizens with a common language. March 20 marks the celebration of the Francophone Festival by Switzerland’s French population.

Roughly 8.5 % of the Swiss population or 565,000 people speak Italian. The language is predominantly spoken in the southern part of the country. Italian-speaking areas include the canton of Ticino, the Gondo valley in Valais, and the southern region of Grisons or Graubünden. In Ticino, more or less 20 percent of the population is Italian by nationality, though other parts of Switzerland also have Italian residents, many of whom became citizens.

With minor exceptions, written Italian in Switzerland is identical to the language in Italy. However, when it comes to spoken Ticinese dialects, these can be as different from Italian as Swiss German is from High German. Isolated communities typically have distinct dialects. The people in Lugano seem to prefer standard Italian, while people in Locarno have their own dialect.

Though Romansh has been spoken for centuries, it only became a national language in 1938 and an official language only in 1996. The federal authorities use the standardized Romansh Grischun, which was created in 1982, but five different dialects exist:

Unlike with the other languages, speakers of Romansh often use their own dialect even in writing. To cross the language barrier with the rest of the population, Romansh speakers use Swiss German.

Less than 1 percent of the Swiss population speak Romansh, yet they remain proud of their heritage. They learn German as a foreign language in kindergarten already and later often add Italian and French, allowing them to communicate freely in the entire country.

Distribution of the Swiss national languages

Romandy covers the area of the cantons of Geneva, Vaud, Neuchâtel, and Jura, but also includes the French-speaking parts of Bern, Valais, and Fribourg.

The linguistic region of Italian Switzerland covers 3,500 square kilometers, including the canton of Ticino and the southern part of Graubünden. You’ll also hear Italian spoken in the Gondo Valley in Valais.

Romansh is an official language only in Graubünden, but the Surselva, the Sursés or Oberhalbstein, the lower Engadin, and the Val Müstair also have communities of Romansh speakers. 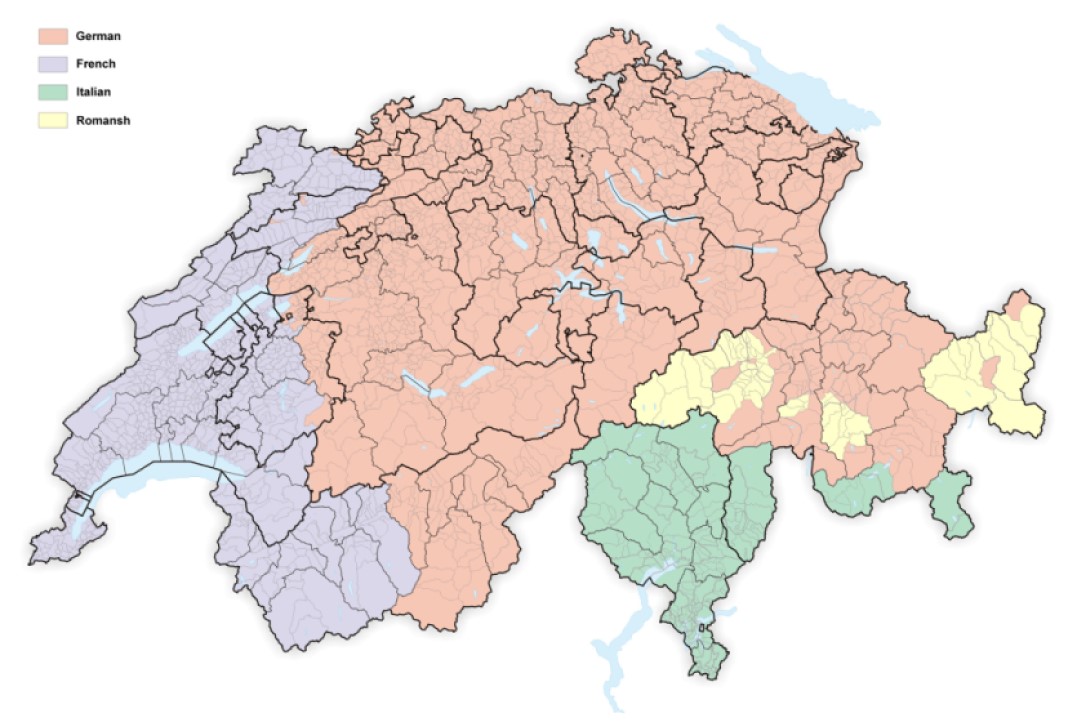 Other languages spoken in Switzerland

Switzerland places great emphasis on the ability to speak a national language as a requirement for integration and nationalization. Nonetheless, many immigrants maintain their mother tongue in Switzerland. The following percentages of the population list another language as their main language:

Main languages and other languages in Switzerland (source).

Do you want to learn English, German, Spanish or French? You can with Lingoda. Visit our website and sign up for your free 7-day trial today!