What are the Airports in the UK? 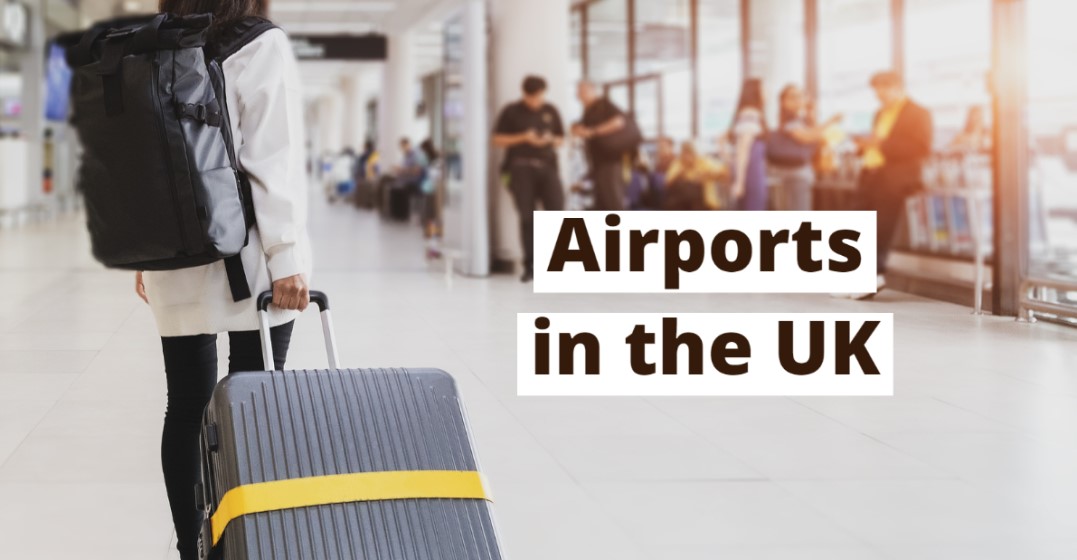 Travelling can often be a stressful experience. Early start times, crowded airports, uncomfortable flights. Long journeys even if you are only going a short distance. Not to mention navigating the airport itself with what you can and can’t bring through security. What about the best airports to fly to to shorten your journey? Or the words you can expect to encounter when you don’t speak the language? So what are the main airports in the UK and what keywords should we be looking out for?

In the UK, which includes England, Scotland, Wales and Northern Ireland, there are 38  airports. 24 in England, 10 in Scotland, 1 in Wales and 3 in Northern Ireland. But like everything in life, not all airports are made equal. So we’ve broken down the UK into key areas and picked out the main airports you might encounter on your travels.

A large percentage of the UK’s population live in and around London. So this highly condensed area needs all the airports it has. From Heathrow, one of the busiest airports in the world, which you should avoid with as much passion as one would for their disgust of brown sauce, especially if you’re taking a connecting flight, to Gatwick, Stansted and the lovely and dinky little City airport. There are lots to choose from.

If money is no problem, many high flying airlines route through London City airport. The Ryanairs of the world i.e. low cost airlines, are more likely to fly through Gatwick and Stansted. Unfortunately what you save in flight prices you lose paying for transport into the city. That said, Gatwick would be the one to choose over Stansted as it is that little bit closer to the city.

If you’re travelling more north but still in England, then you might look at Manchester, Liverpool or Leeds Bradford International airport. Manchester is one of the biggest airports in the UK, aside from Heathrow and Gatwick. It will also provide you with lots of different options if you choose to travel on from there. The Liverpool John Lennon airport, named after the great Beatles man, is your gateway to the west of England. Leeds is your better choice if you’re heading to the North Yorkshire Moors or looking to discover the far east side of the UK.

While Birmingham city is not known for its beauty and is possibly not the most touristic place you’ll visit in the UK, their airport is smack bang in the middle of England. Birmingham’s airport has a long history and was used for flight training during World War II. Nowadays it’s a hot spot for many domestic flights to take you all over the UK and certainly worth a consideration if you’re interested in travelling to Nottingham, Leicester or Coventry.

West of London and right beside the water is the historic and picturesque city of Bristol and along with it, Bristol Airport. The main airport serving the West of England, it is the pathway to many historic towns and villages including Glastonbury. Which, of course, is home to the infamous Glastonbury Festival.

If you’re venturing to the north of the UK, to the wild and picturesque lands of Scotland, then you can either fly into Glasgow, Aberdeen or Edinburgh. Your choice will depend on where you ultimately plan to rest your head. For views of the North Sea and possibly Norway, head to Aberdeen. For a wealth of history and access to the east and lower part of Scotland, Edinburgh is a perfect destination. And if you’re looking for the life and soul of the Scottish party, Glasgow is where you will want to be. Glasgow will also take you close to Scotland’s national park, Loch Lommond.

Wales’s main airport is based in the city of Cardiff. Located at the bottom of the country, it is perfectly positioned to take you around the coast line of this beautiful landscape. However, if your plans take you further north, it might make more sense to fly into Liverpool or Manchester airports and travel down from there.

Across the water is the picturesque and complex Northern Ireland. Consisting of 6 different counties, the main international airport is located in Belfast, on the east side of the country, right beside Lough Neagh. Northern Ireland is quite a small country and so the remaining counties are easily accessible from Belfast airport.

The city of Derry does have a little airport that services the whole of the UK as well. So if you’re keen to see the very north of Ireland and venture to Derry’s luscious neighbour, Donegal (which is actually a part of the Republic of Ireland), a flight to Derry might be your best bet.

Key words you will find in UK airports

While all these airports will have their signs in English, they may well be in Welsh and Scottish as well.

Arrivals – this is where you arrive in an airport.

Departures – where to go when you’re leaving the country.

Delayed – your flight will be late.

Boarding – time to get on your flight.

Go to gate – time to go to the place your flight will be leaving from.

Lost Luggage – where to go when your bags have not turned up in your destination.

Check-in – where you register for your flight and leave your bags.

Boarding pass – the document you receive once you’ve checked in.

Do you want to travel to the UK soon? Prep your English skills beforehand and book your free 7-day trial with Lingoda. Our native speaking English teachers will help you with everything from pronunciation to grammar!