The top 10 airports in Spain 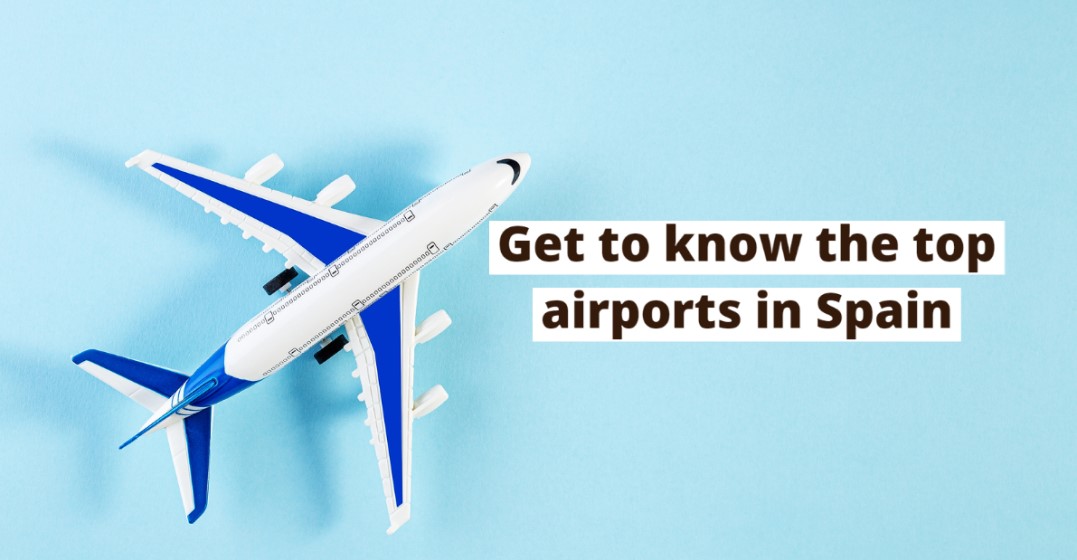 Spain on the iberian peninsula is a popular travel destination in Europe. The country’s culturally rich cities, the breathtaking nature, and the many vacation hotspots such as the Canary Islands and the Balearic Islands attract many visitors each year. Spain’s largest airports in Madrid, Barcelona, and Palma de Mallorca are among the top 25 busiest airports in Europe. The following overview will introduce you to the top ten airports in Spain which constitute popular destinations and important travel hubs.

What are the airports in Spain?

Madrid is the main gateway to Spain, especially for international flights, and the city’s airport receives more than 50 million travellers each year. Since it’s located conveniently close to the city center, the city of Madrid and its many attractions become easily accessible when you fly into Barajas airport. Among Madrid’s highlights are the Royal Palace, the landmark Plaza Mayor, and the hotspot Gran Via with its stunning architecture, shopping opportunities and nightlife. The Museo del Prado is one of the most important art museums in the world. The meeting point Puerta del Sol invites people watchers, and Paseo del Prado or Parque del Buen Retiro allow you to relax in the midst of this bustling capital.

Spain’s second largest airport is simply known as El Prat and is just a short bus ride away from Barcelona’s busy center. BCN is the airport to explore Catalonia and its capital or relax on the Costa Brava. Barcelona is not only densely populated, it’s also bursting with history and architecture for you to discover. With every stroll through the city, you’ll see buildings rich in history and architecture such as Sagrada Familia and Gaudi’s works, Art Nouveau, the Gothic cathedral, Roman ruins, or modern street art. Barcelona offers plenty of beach life as well, on top of art, music, festivals, and world class cuisine.

Majorca is just a small island, but the Palma de Mallorca airport is big enough to accommodate millions of tourists passing through in the summer months. They all flock to the sunny beaches of the popular vacation spot that is this   Mediterranean island. Other than soaking up the sun, things to see and do in Majorca include exploring Palma de Mallorca and its history with the cathedral of Santa Maria of Palma or touring the island to discover hidden spots and viewpoints. See the impressive nature in Mondrago Natural Park, party in Magaluf, taste the Mediterranean food at local markets or dive and snorkel in the sea.

The busy Malaga airport is the entry point for visitors to the Costa del Sol in the south of Spain. It’s close to the city center of Malaga, but also to the vacation spot Torremolinos. With roughly 20 million passengers each year, the Malaga airport is especially busy in the summer months. Apart from the beaches and the party scene, the relaxing resorts and golf courses,  Malaga is a testament to Spain’s Islamic past, home to the majestic fortress La Alcazaba, and the birthplace of Pablo Picasso. During Malaga’s many festivals, you’ll experience Andalusian culture and cuisine with flamenco, sherry and grilled sardines.

The seaport Alicante is the capital of the Spanish province by the same name and home to many retired Euopeans living a life of sunny bliss at the Costa Blanca. The Alicante airport attracts 20 million travellers each year, many of whom come to vacation at the pristine Mediterranean coast. Enjoy the beaches, sea, and nightlife, or explore the medieval part of town with its castle, Casco Antiguo, many museums, and the marble-laid promenade.

This is the busiest airport on all of the Canary Island with the months of July and August being peak tourist season. Gran Canaria airport is close to the city of Las Palmas de Gran Canaria, the island’s capital. Here you’ll find the city beach of Playa de Las Canteras with excellent conditions for swimming and relaxing in the sun. Las Palmas is otherwise known for its carnival, shopping opportunities, a port where many cruise ships dock, and colorful neighborhoods resting on the hills. It’s also a great starting point from where to experience the volcanic crater Cauldron of Bandama.

Tenerife is the largest of the Canary Islands and has two airports, Tenerife North (TFN), and the bigger Tenerife South (TFS). International connections mostly use this airport and travellers come in the summer and winter months to enjoy popular holiday resorts close by such as Los Cristianos, Playa de las Américas and Costa Adeje. Flights to the Spanish mainland and other Canary islands operate from Tenerife North. A direct bus service connects both airports. The most impressive of all of Tenerife’s attractions is Pico del Teide. At 3715 meters, the vulcano is Spain’s highest elevation.

The island’s airport is small, yet sees more than five million tourists each year. Ibiza airport is close to Ibiza and serves as a gateway to the two Balearic Islands Ibiza and Formentera. The majority of tourists arrive between May and October to catch the summer’s party scene with throbbing techno music at the beach clubs. Yet Ibiza is also home to many world heritage sites, which you can see on your own or with a guided tour. Apart from shopping opportunities, quiet villages and resorts for relaxing, the island has also many tranquil beach coves to offer.

With just one terminal, the smaller-sized Valencia airport still serves around six million passengers each year. Airlines offer flights between Valencia and Madrid and many European cities such as London, Rome, Paris, Amsterdam, or Geneva. The city of the arts and sciences, La Ciudad de las Artes y de las Ciencias, is a major attraction with modern structures, a planetarium, cultural venues and a botanical collection. La Lonja de la Seda, meaning “silk exchange”, is a world heritage site of Valencian gothic architecture. Other attractions are the cathedral, the Casco Histórico, the bohemian neighborhood El Carmen, and the relaxing riverbed park Jardín del Turia.

More than five million people fly into Seville annually through San Pablo airport. The busiest months are between May and August, when travelers seek easy access to the famous beaches of the Costa del Sol and the capital of Andalusia, Seville. The gothic cathedral in town is a world heritage site and impressive attraction. Architectural highlights include Real Alcázar, Parque de María Luisa and Plaza de España. Visitors also flock to the charming neighborhood Santa Cruz and the museum of fine art. Day trips to Cordoba or Granada are possible for more sightseeing.