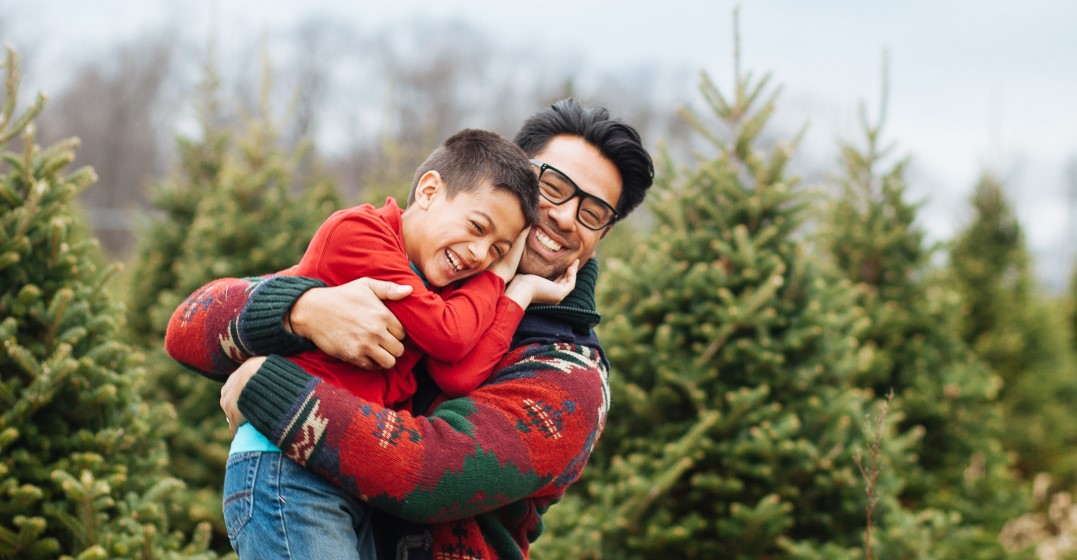 December gives us plenty of reasons to feel joyful. If you celebrate Christmas and the New Year, you expect to spend some fun times (and, let’s face it, awkward ones, too) with family and close friends. You’ll eat delicious food, have a fair share of your favourite beverage, and dance until you drop. Depending on where you live, you might go to the beach or sip on some delicious hot chocolate while watching the rain outside.

How do you say Merry Christmas and Happy New Year in other languages?

Hoping to text your Spanish-speaking friends a heart-warming message? Then use “¡Feliz Navidad!”. If, on the other hand, you’re planning on spending New Year’s Eve in Barcelona, Mexico City or Buenos Aires, “¡Feliz año nuevo!” (Happy new year) or “¡Próspero año nuevo!” (prosperous new year) might come in handy. Many people use “¡Felices fiestas!” (happy festivities) to include both Christmas and New Year in one greeting.

The French language is spoken in a wide variety of countries, in different geographical regions: in Canada, in Europe, in smaller pockets in Asia, and in 31 Francophone countries in the African continent. For that reason, you’re likely to meet someone who needs a warm greeting in French! Use “Joyeux Noël” (joyful Christmas) and “Bonne année” (good year) to wish them well.

Germany has established its reputation as a Christmas market specialist, with several cute Christmas markets spread across the country offering delicious food, warm drinks, little gifts and warm clothing. Christmas is a beloved time of the year in German-speaking countries, so why not make it better by wishing people well in their mother tongue? Use “Frohe Weihnachten!” (“joyful Christmas”) and “Frohes Neues Jahr” (“joyful New Year”).

How to save money when learning a language

While Portugal associates Christmas with warm clothing, good wine, lots of chocolate, staying in, lighting up the fireplace and watching the rain fall outside, Brazilians will celebrate Christmas at the peak of summer, and Angolans go outside to visit family and friends, bringing lots of delicious food to celebrate! All Portuguese speakers appreciate a warm gesture in their own language. To create a connection, let them know you wish them “Feliz Natal” or “Bom Natal” (Happy/Good Christmas) and “Feliz ano novo!” (“Happy New Year!”). As is the case with the Spanish language, you can also wish “Boas festas!” (“good festivities”) to include all special days in one greeting.

The Italian charm keeps on giving, and Christmas greetings are no different. Surrounded by the beauty of presepi (nativity scenes), huge family dinners, a long month of inspiring celebrations and the zampognari (bagpipers) in the South, you’re likely to get many “Buon Natale!” (“Good Christmas!”) and “Buon anno!” (Good year!). An alternative to wishing someone a Happy New Year would be using “Felice Anno Nuovo”.

“Счастливого Рождества!” (Schastlivogo Rozhdestva!). “С Новым Годом!” (S Novim Godom!). We’ve just wished you a Merry Christmas and a Happy New Year in Russian, the land of rough winters, private family time and homecooked meals on Christmas time. While New Year’s Eve’s scale is much bigger than that of Christmas (Christmas was only allowed to be celebrated after 1991, with the collapse of the Soviet Union), it is still a time to spend meaningful moments with your loved ones, celebrating your faith and enjoying a warm drink!

Planning on spending a fun Christmas or New Year’s Eve in Amsterdam? Then you’d better learn how to say “Prettige Kerst!” (Happy Christmas), “Zalig Kerstfeest”, “Zalig Kerstmis” or “Vrolijk Kerstfeest” (Cheerful Christmas), as well as “Gelukkig nieuwjaar” (Happy new year”). Remember: Christmas in the Netherlands is a rather quiet time around family compared to the 5th December, on which children will hang their shoe on the fireplace, get their presents, bake biscuits, and get to see Sinterklaas himself come ashore from a steam boat, as local church bells ring!

China is not known for its Christmas celebrations for a good reason: only about 1% of the population are Christian, and the holiday is mostly observed in bigger cities or among younger people. If a Mandarin-speaking friend celebrates Christmas, puts up their Christmas tree and is looking forward to meeting 圣诞老人 (“Sheng dan lao ren”, or Santa Claus), tell them: “圣诞快乐 (Sheng Dan Kuai Le)!” (Merry Christmas) and “新年快乐 / 新年快樂 (Xīnnián kuàilè)!” (New Year Happiness).

Christmas has become highly romantic in Japan, rather than a religious holiday necessarily. Many young Japanese people see the opportunity to spend time with loved ones, have fun outside among the lights, exchange lovely gifts and booking a romantic dinner outside. It’s a great time to say: “めりーくりすます (Meri Kurisumasu)!” and “明けましておめでとうございます。(Akemashite omedetō gozaimasu)!”.

Your Korean friends are more likely to be Christian than your Chinese or Japanese friends, so it is well worth a try to deliver a meaningful “메리 크리스마스 (Meri krismas)” or “즐거운 크리스마스 되세요 (Jeulgaeun krismas doeseyo)”. Among a Christmas cake, a wonderfully-lit tree and gifts from their families, your Korean friends will be touched by your gesture! To wish them a Happy New Year as well, go for “새해 복 많이 받으세요 (Saehae bok mani badeuseyo)”. Don’t forget Korea celebrates two New Years! One on 1st January and the other one on the Lunar New Year.

Christianity is not traditionally associated with India, but do not be mistaken: even though only about 2.3% of India’s population are Christians, that is still over 25 million Indians celebrating the holiday! In Mumbai and especially in Goa, you are likely to use “शुभ क्रिसमस (shubh krisamas)” (Happy Christmas). For the entire country, as it celebrates its first steps into a new year, feel free to tell everybody “नया साल मुबारक हो (Naya saal mubaarak ho)!”: Happy New Year!

Language learning: How to keep your New Year’s resolution

Apart from being largely spoken in India, Urdu is the official language of Pakistan. Because the vast majority of Pakistanis are Muslims, not Christians, Christmas does not play such a large part in the culture, but it still is celebrated enthusiastically by around 5 million Christians who participate in big processions in Lahore, carol singing, and large shared meals at the local church. To them, say “کرسمس (krismas mubarak)” and take the opportunity to wish them a “نیا سال مبارک ہو” (Naiya saal mubarak ho)” as well!

In several Arabic-speaking countries, Christianity is the second most popular religion after Islam, so you can still observe many families coming together to celebrate Christmas. In Egypt, Palestine and Lebanon, there are public celebrations and decorations. Christmas became a public holiday in Iraq fairly recently, too. To all of your Arabic-speaking Christian friends, say “عيد ميلاد مجيد (Eid milad majid). To wish them a Happy Year, tell them “أتمنى لك سنة جديدة سعيدة (Atamannā laka sanah ǧadīdah saʿīdah!)”, or كل عام و أنتم بخير (Kol Aam wa antom bkhair).

11 traditions only Americans do

Turkey might be a predominantly Muslim country, but that does not stop Christians from celebrating at the local church, enjoying wonderful decorations and lights outside, and visiting luxurious shopping malls dressed in Christmas themes from top to bottom. If you’re lucky, you might get some snow, too! To put a smile on a Turk’s face, declare you wish them “Mutlu Noeller” (Happy Christmas), as well as “Yeni yılınız kutlu olsun” or “Mutlu yıllar” (Happy New Year).

Spending a wonderful time in Ho Chi Minh city, the weather is hot and it happens to be Christmas? While Vietnam does not recognize Christmas as a public holiday, you are sure to find some young people celebrating it in cafés, restaurants, hotels and department stores, where Christmas lights and decorations abound. Wish them “Chúc mừng Giáng Sinh” (Happy Christmas) and “Chúc mừng năm mới!” (Happy New Year)!

A multilingual person shares: Best way for adults to learn a second language

Like in Vietnam, Christmas is not a public holiday in Thailand, as the vast majority of the population is Buddhist. However, that does not mean you shouldn’t spend it in Bangkok, or swap the fireplace for a sunny beach! Thai people see Christmas as a reason to be joyful and inclusive, rather than forbidding the celebration. You can still look around and enthusiastically say: “สุขสันต์วันคริสต์มาส (Suk san wan Christmas) and take the moment to wish them “สวัสดีปีใหม่ (Sa was dee pee mai)” as well…that is, a Happy New Year!

85% of Indonesians are Muslim, but that means there are still about 20 million Indonesian Christians who you can say “Selamat Natal” (Merry Christmas) to! Among church celebrations, Indonesian versions of traditional Christmas tunes, the expectation of receiving gifts from Sinterklass (Santa Claus, influenced by Dutch), your Indonesian friends will be happy with your gesture! Oh, and while you’re at it, say “Selamat Tahun Baru”, too! After all, you wish them a good year, don’t you?

How many people speak Arabic around the world?

Christmas is a highly social event in many African countries, with midnight masses being extremely popular and families getting together to celebrate and exchange (frequently homemade) gifts. If you know a friend from Tanzania or Kenya, let them know you wish them a “Krismasi Njema” or “Heri ya Krismasi” (Happy Christmas), not to mention a “Heri kwa mwaka mpya” (Happy New Year)!

Christmas isn’t widely observed and not a public holiday in most of Israel. Most people see it as a regular day. However, churches still do celebrate the occasion and Nazareth is filled with Christmas lights on the streets, as well as markets, parades and even fireworks! Use “חג מולד שמח (Chag Molad Sameach)” to wish your Israeli Christian friends a great Christmas, and take the chance to let them know you wish them a “שָׁנָה טוֹבָה (shaná tová)” (Happy New Year) as well, by the time the Jewish New Year comes along.