Welcome to Part II of Lingoda’s Guide to the Russian Leather Ball Competition 2018. Today we will present Kazan, administrative capital of the Republic of Tartarstan, and Nizhny Novgorod. 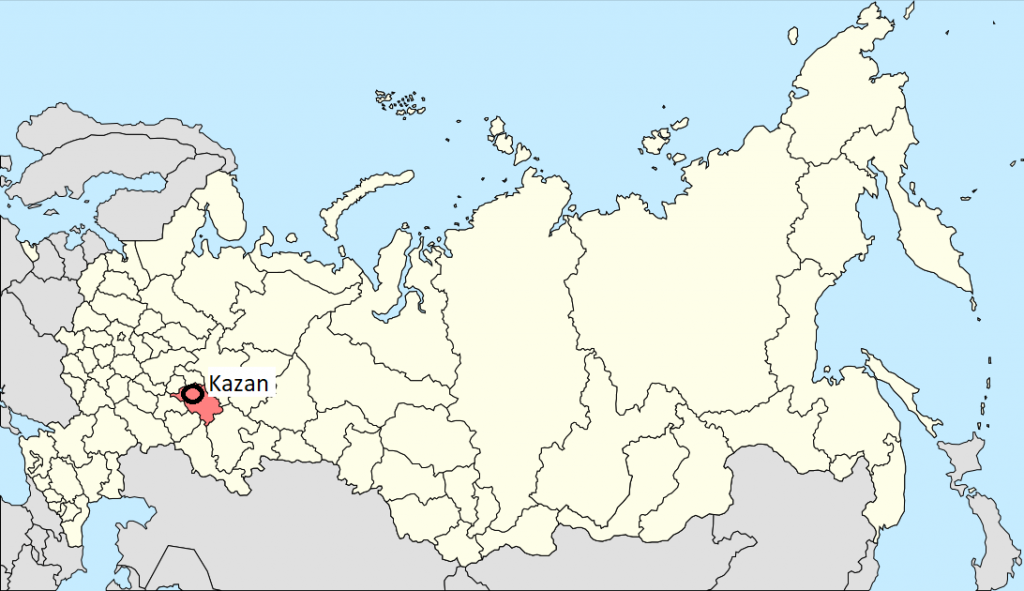 -Kazan is actually the capital of the “Republic of Tartarstan”. It is the center of Tatar culture and identity.

– Only about 48% of the population are ethnic Russians, while 47% are ethnic Tatars. That is an unusually low percentage of Russian ethnics for any major city in Russia.

– While we can roughly trace back when and how Rome was “founded”  10 000 years ago, how Kazan came to be only a few hundred years ago remains a mystery. That attests to the importance of record keeping. Well, not that there is a shortage of documentation in the 21st century ….

–  The entire city was destroyed during the Pugachev revolt in 1774-1776. It was made entirely of wood so that wasn’t too hard to do. They then rebuilt it with stone.

– Although the exact history of Kazan is highly disputed, the city officially celebrated its millennial anniversary in 2005. What a coincidence that they just made up their minds when the 1000-year anniversary came around.

Qolsharif Mosque in the Kremlin in Kazan, Russia. Photo by A. Savin

– Like most Russian cities, Kazan has a humid continental climate.

– Temperatures have historically varied between a record low of -46,8°C in January and a record high of 39,0°C in August. The average temperature for Jun/July is 25°C.

– Rain seems to be a recurring theme in all of these Russian cities. Average rainy days in June/July are 18 so don’t forget your rain coat.

– Due to its cultural heritage, Kazan has different things to offer its visitors than other major Russian cities.

– Definite must-see is the Temple of All Religions. It includes a mosque, a synagogue and an Orthodox Church among other things and is still under construction since 1992. Ultimately, it is supposed to include 16 domes for all 16 major religions.

– Qolsärif Mosque is another religious building that fell victim to the Soviet strong anti-religious stance. It was considered to be one of the largest Mosques in Europe outside of Istanbul and a symbol of Tatar culture and identity. Rebuilding ended in 2005.

– If you’re less into culture and architecture, there are a plethora of beautiful parks in the area along with many lakes, rivers and canals. 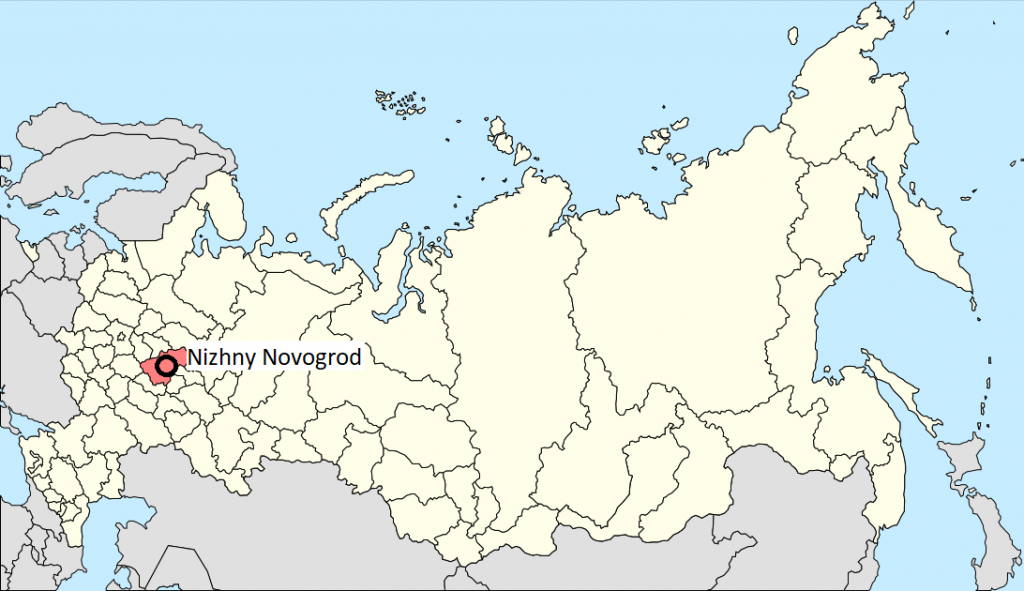 – Nizhny Novgorod is where the pasts of many other Russian cities meet. Considered by the Moscowites to be great strategic fortress, it played a vital part in their wars against the Tatars of Kazan.

– Like most cities in Russia, Nizhny Novgorod was renamed by the Soviets. From 1932-1990 the city was known as Gorky in honor of famed writer Maxim Gorky.

– Nizhny Novgorod has severely negative population growth. 12 000 births and 20 000 deaths a year means that the city is shrinking by 8 000 people a year. It would still take 150 years for all Novgorodians to have died out though, so still time to make some babies.

-Until the end of the Soviet Union, Nizhny Novgorod, then known as Gorky, was a “closed city”, access to which was forbidden to foreigners. Today they prepare for the biggest influx of non-Russians there has ever been. 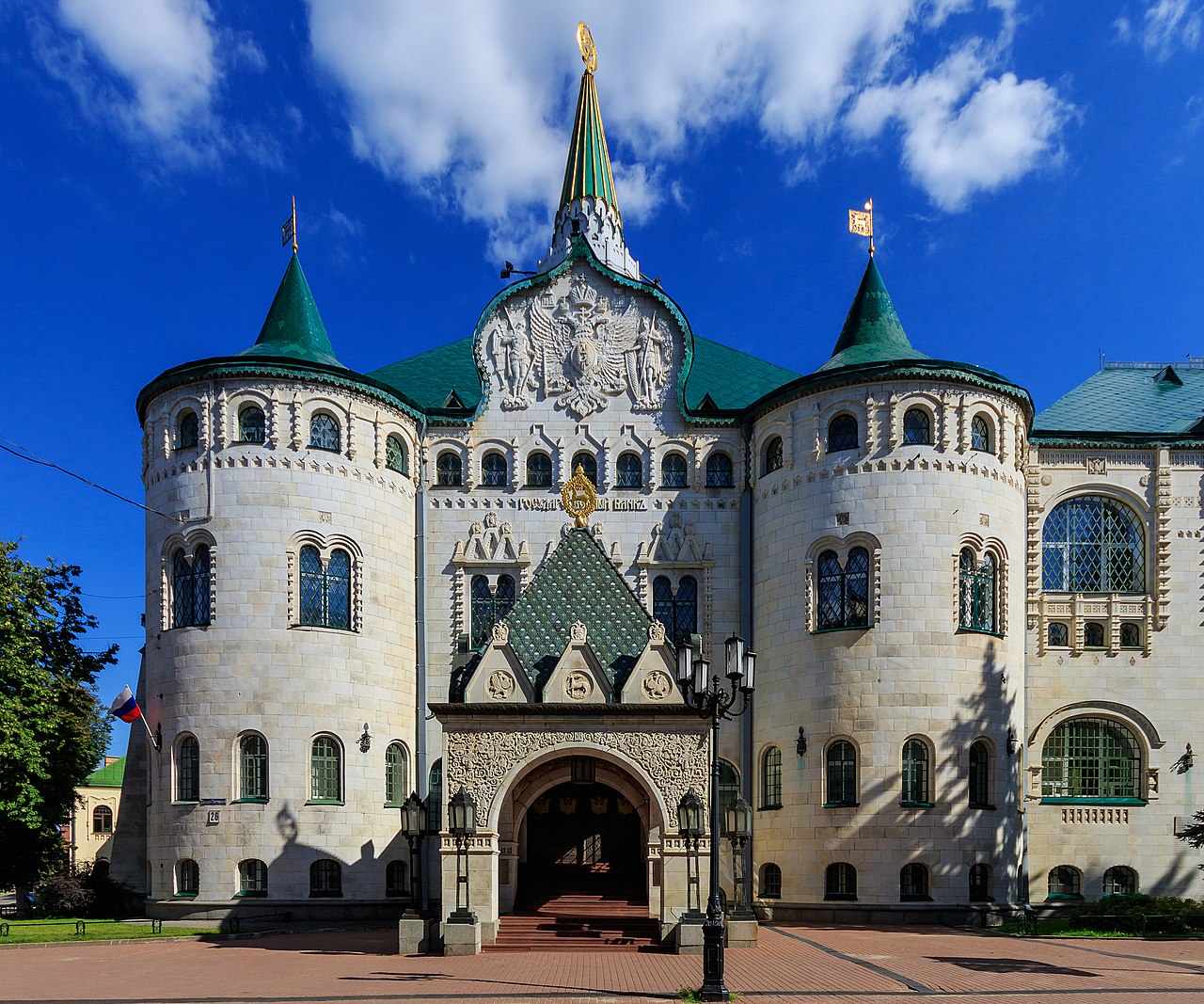 State Bank of Nizhny Novgorod built in 1913. Photograph by A. Savin.

-Like the previous cities we have presented, Nizhny Novgorod lies in a zone of humid continental climate. This gives it relatively high humidity year around. In July, humidity can go up to 85%, while the average is at 70%.

-Temperatures are also quite similar to other Russian cities. Record low and record high temperatures were -41,4°C and +38,2°C, while averages for June/July lie between a mild 22-24°C.

– it seems as though you will probably need your raincoat yet again. The average number of rainy days for June and July is 19. You’d have better odds betting on a British win at the competition.

-For those that might not have known (include me), Kremlin does not refer to the specific seat of the Russian government in Moscow. Instead a Kremlin is any citadel in a Russian town. And there is a very beautiful one right in Nizhny Novgorod. Go check it out!!

– If those odds turn and you do get a bit of sunshine, go check out Sormovsky Park on the West bank of the city. It’s a bit outside the city, but absolutely worth the trip.

– If you want a bit more culture, go visit yet another magnificent church, the Church of Nativity of the Blessed Virgin Mary. Although it was originally meant to be destroyed during the soviet years (really not big fans of religion, were they?) the rector of the church managed to preserve it by elaborating its cultural importance in Russian history. Definitely worth a visit.