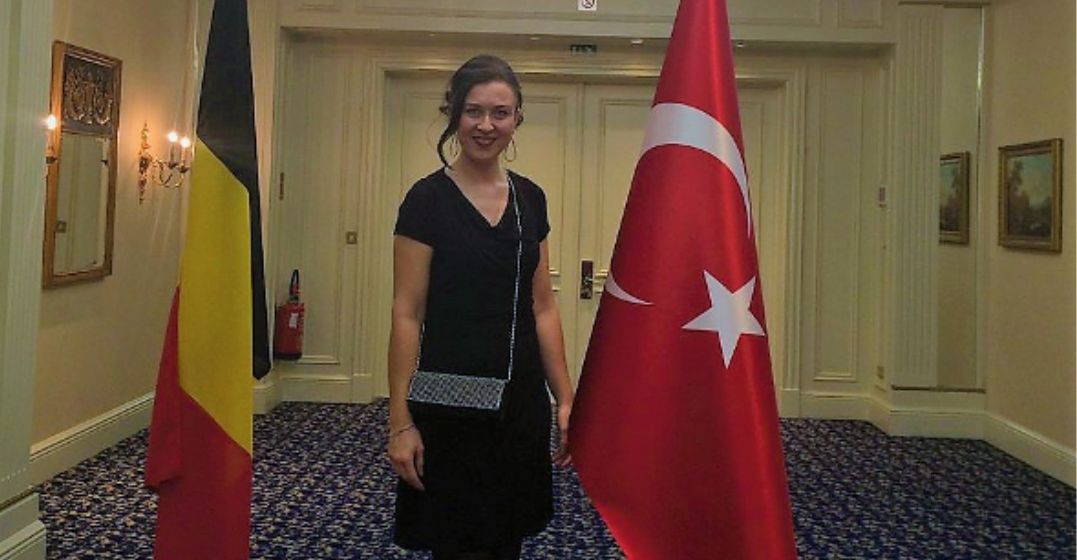 For this week’s blog post, we decided to do something a bit different: to tell the story of one our students and her experience learning a language with Lingoda. It all started when we received this message on Twitter:

We were thrilled to hear from one of our students and were thankful for her kind words. The fact that she enjoyed her Lingoda experience so much that she was willing to meet up with her teacher in person and show her around Brussels made it all the more enjoyable for us.

However, being curious people by nature, we wanted to know more about the background of this spontaneous meeting and so we reached out to the student and asked if she was willing to share the whole story with us. Luckily, she was!

Let us introduce you to Zeynep, a teacher who works for the Education council at the Turkish embassy in Belgium, teaching Turkish and English to fellow migrants. She has been learning French with Lingoda for the last 9 months, after arriving in Belgium in late August 2014.

After living and working in Flanders, the Dutch-speaking part of the country, for two years, the local government changed the immigration policy and the rules on staying in the country became a lot stricter for foreigners, forcing Zeynep to apply for a job in Wallonia, which is predominantly francophone. To be able to do this, she had to be able to speak French fluently.

Our friend Zeynep was at first overwhelmed by the prospect of learning “such a complicated language”. As she said in her own words: “I would have rather died than to start learning French from scratch”

Her reason to learn French

Seeing that she wanted to stay in Belgium and pursue her career, Zeynep started French classes at a local language school and even tried the intensive French language immersion program at the University of Ghent. However, after being forced to miss multiple classes due to her busy work schedule and with the classes having a high number of students in them, she was not having much success.

One day, one of her colleagues from the Embassy told her she had started taking “online classes” with Lingoda, but Zeynep wasn’t convinced. “I found it very surrealistic as I thought I couldn’t learn without having to prepare to go to the course or without interacting with the teachers and classmates in “real life”. So, I refused”.

Zeynep soon started hearing about Lingoda from other students as well, who were having positive experiences, and she began to warm to the idea. She saw on our website that she could book a Trial Class for only €0.99 and she decided to give it a shot. “I still didn’t believe it would work for me but I had to at least give it a try”, she remembers.

Her experience learning French with Lingoda

And so she signed up and was soon convinced by how easy and comfortable the learning format was. She no longer had to make the trek to a school at the other end of town and was no longer bound by a fixed schedule, but rather could adapt her courses to fit her lifestyle. She could focus on topics she found more interesting and was able to attend class from the comfort of her own bedroom.

Lingoda’s classes are also generally more personalized thanks to a low number of students (usually around 5 per class or less) and helpful teachers, who encourage participation and make sure each student understands the subject matter before moving on to a new topic.

“I really can’t believe how well it works!”, Zeynep says, “I’m usually a bit shy but I’m not tongue-tied anymore when I have to speak in French!”. She found herself really getting into the heat of things: “I started to download all the chapters for the level I was currently taking, printing them out and studying them on the train, at the café…So when it was time to have my lesson I was totally prepared”

At one point, she even took a class while queuing at the airport: “I once was stuck at the airport, and while waiting at the check-in queue, I switched on my Skype, connected my headset, got my print-outs ready and started the class!”

That’s when the meet-up with her teacher happened:

“One day I was having lunch with some colleagues and we sometimes talk about our classes, the funny stories we have and of course, our favourite teachers and so on […] we had been planning a trip to Brussels and somehow, we thought it would be great idea to meet one of our favourite teachers, Xenia, since we really had the time of our lives in her classes. She was delighted with the idea and after exchanging our contact details we arranged a date and met her. She was as nice in person as she was during the lessons. And of course, we took a selfie and shared it on Twitter and the rest is history as they say.”

After hearing Zeynep’s story, we asked her some questions that we thought would be helpful to you, the Lingoda community:

Join Lingoda and start living your own story!

At Lingoda, we are committed to help our students to learn a foreign language in the most effective way possible. For doing so, we rely on a worldwide network of qualified native teachers, who are able to provide with classes around the clock, offering a unique flexibility. Our students come from all over the world and each one of them have different levels, backgrounds and goals. However, they all have something in common: their passion and motivation to learn a new language and build a brighter future for themselves. Either if you need to learn a new language for education, work or immigration purposes, you can rely on Lingoda to guide you on the way to success!