How to Write a Letter in German In this digital age, fortunately we can attend to many issues via email or even instant messenger. But on many formal occasions, it’s still necessary to send a written letter, whether you’re applying for a job or apartment, want to inquire with an official government agency, or need to deal with a lawyer, insurance agency, or other representative of bureaucracy.

Many services in Germany are still not digital and formal communication through regular mail is still quite common. How to write a letter in German is therefore a useful skill to have to master your daily life in the country.

A formal letter in German should begin with a proper header. This consists of the sender’s address followed by that of the recipient. Include the country for an international address. Next is a line stating the place from where the letter originates, followed by the date you posted it. You can then include an optional subject line (“Betreffzeile”) before a formal greeting, after which you begin the body text of your letter.

You can use a smaller font size for your own address at the top of the letter to save space. When using an envelope with a window (“Fensterumschlag”), you need to line up the recipient’s address with the window. The window area begins 50mm from the top of the page and is 40mm in height with an indentation of at least 20mm. German rules are complicated, aren’t they?

The line with place and date is aligned to the right and can be written as “Berlin, 25.10.2020” or “Berlin, Donnerstag den 20. Februar, 2020”. A subject line is optional, but helps to quickly establish what the letter is about. You can put a reference number, customer ID, or the reason you’re writing the letter.

Sample of how to begin a formal letter in German. 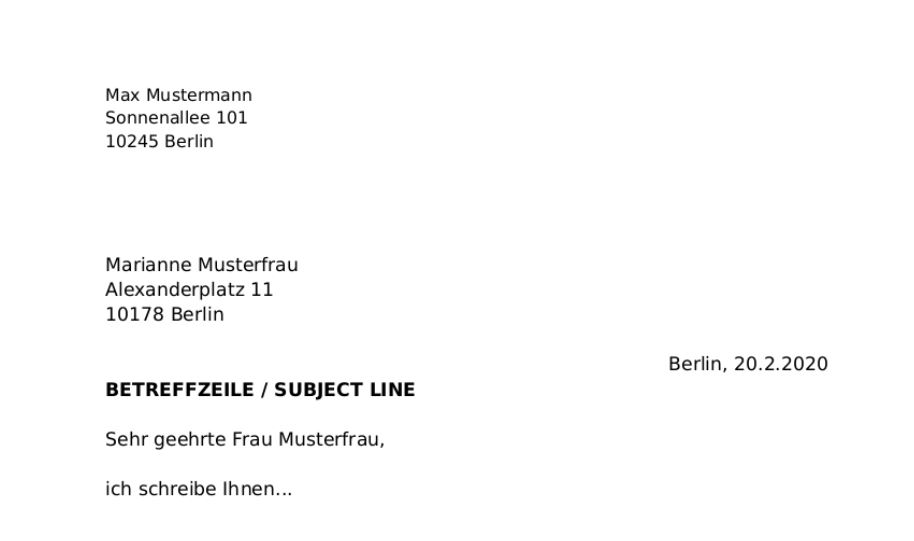 The following are examples for formal greeting lines when composing a letter in German:

Take note that the formal greeting ends in a coma and the following opening line of the letter begins with a lowercase word. Continue addressing the recipient formally throughout your German letter: use “Sie”, “Ihr”, and “Ihnen” as pronouns and don’t forget to capitalize the words!

Depending on the subject of your letter, you might open with one of the following lines:

To formally conclude a letter in German, you can use one of these salutations:

Note the lack of a comma after the sign-off at the end of the letter. Don’t forget to sign your letter with your name. If you’re attaching documents such as a CV or a certificate, you can include all attachments as an itemized list after your sign-off with “Anlagen” oder “Anhang” as a headline.

Depending on how informal your relationship to the recipient actually is, there are hardly any rules you need to follow when composing a letter to a German friend. You can include the entire letterhead as you would for a formal letter, though you’d probably leave out a subject line.

Yet it’s more common to just include the place and date to let the addressee know when and whence you’re writing. After that, you can launch right into any type of informal greeting you prefer:

Don’t forget that adjectives or nouns need to correspond properly to the gender of the recipient. Same as with a formal letter, the first line is not capitalized.

To close your letter informally in German, you can sign off any way you like. Final salutations are often warm and intimate in German and express best wishes:

How to address an envelope in Germany

Ideally, you’ll address an envelope for your German letter with printed labels, but you can also write out the address (legibly!) by hand. Keep these rules in mind to not delay your letter unnecessarily by sorting problems:

For mailing your letter, go to an office of the “Deutsche Post” (German post) or look up the required postage online. The postage varies with the size, weight, and destination of your letter. If you have the correct stamp at hand, you can place your letter in one of the public yellow mailboxes. Keep in mind that they’ll be emptied only once or twice daily.

For fast delivery or questions about postage, it’s best to go to an office or private mail carrier service. You’ll be able to ask about delivery times and options in person.

If you’d like more tips on how life works in Germany, or German speaking countries, visit the Lingoda website and sign up for your free 7-day trial today. Our native speaking German teachers will guide through life skills, grammar, pronunciation, and more! 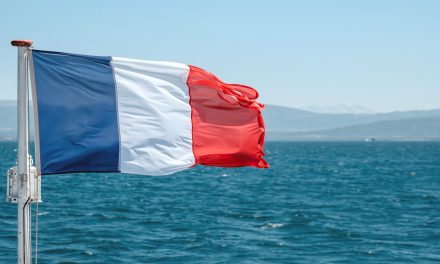 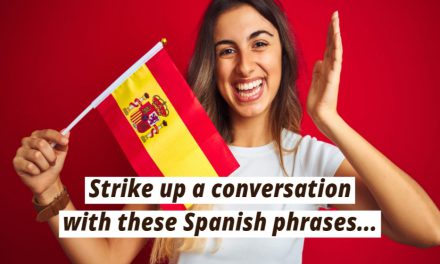 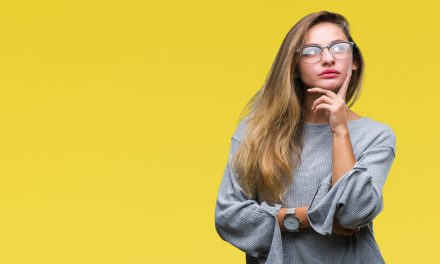 Boost Your Confidence with the Sexy Side of French 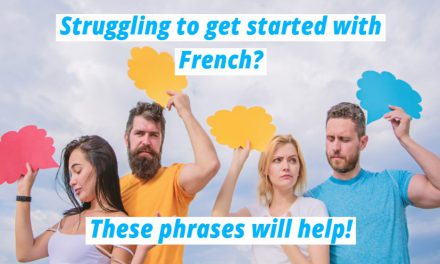