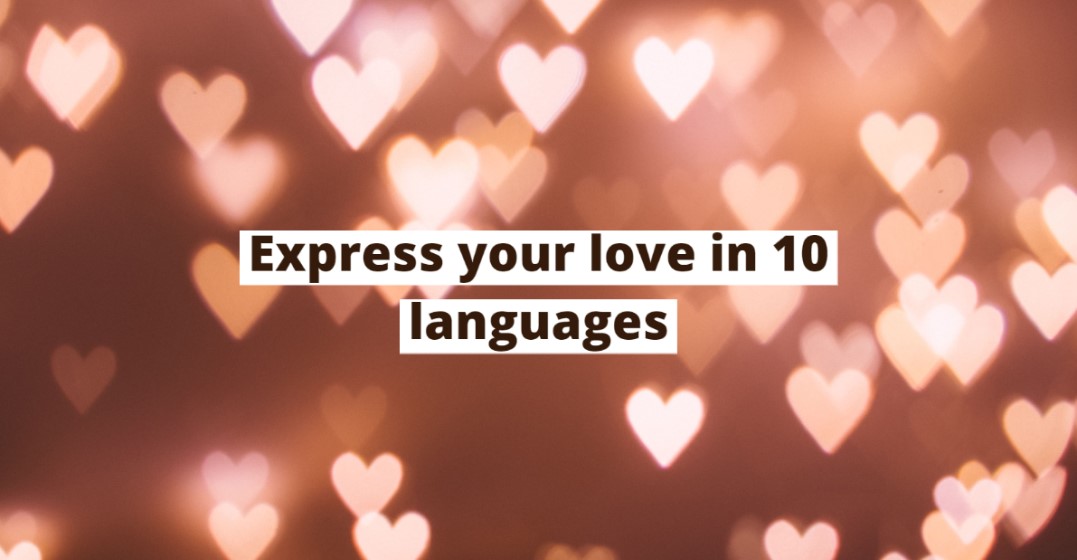 Want to romance your way around the world? Let Lingoda help you with these 10 phrases to say I love you in different languages.

How do you say ‘I love you’ in 10 different languages?

With Spanish, you can capture the hearts not only of people in Spain but also your lovers all over South America. (One at a time hopefully, not one in each country at the same time). Te amo is very intense, so it’s a good idea to stick with te quiero most of the time.

We couldn’t have Spanish without also having Portuguese, could we? Whether you’re sipping coffee in a Lisbon café, or cavorting on a beach in Rio de Janeiro, eu te amo will be very useful.

Not to state the obvious, but Russia is a massive country. And Russian isn’t just useful in Russia. It’s a second language in lots of Eastern European countries too, so practise getting your mouth around Ya lyublyu tebya to impress Russian-speakers far and wide.

This phrase in Mandarin actually means I like you, not I love you. But, this is what native Chinese partners say to one another to express their love. Interestingly, the phrase I love you is often directly translated into Chinese by foreigners or Chinese expats. And then “real” Mandarin-speakers laugh at those people. So stick with Wǒ xǐ huān nǐ when you’re in China.

It seems like everyone wants to know a couple of words of Japanese. It’s a cool language. So why not learn I love you? Aishiteru is a very strong way of confessing your love so make sure you save this phrase for the right occasion. Some Japanese speakers even wait until they’re married to say this to their partner!

Over 400 million people around the world speak Arabic. So your chances of falling in love with an Arabic speaker are relatively high. Say ʾanā ʾuḥibbuka to a man, and ʾanā ʾuḥibbuki to a woman. Arabic script is also very beautiful, so learning to write it would be a bonus.

Ah, German, the language of love. I’m joking, obviously. I’m not sure a less romantic language then German exists. But we shouldn’t punish the lovely German people for their harsh-sounding language. So next time you meet a lovely Hans or Helga, practise your Ich liebe dich.

Nope, not a piece of Ikea furniture. With Sweden being a relatively small nation, with not that many native speakers, you might be thinking, “Why learn the Swedish phrase?”. But, Swedish men (and women, actually) are often said to be some of the best-looking in Europe. Be prepared with Jag älskar dig when you bump into a gorgeous Swede.

If Swedish men are often thought to be the best looking in Europe, Polish women hold the same accolade. The Polish language is one of the hardest to learn, but their version of I love you is easy to master. Practise saying Kocham cię before your next trip to Krakow.

About 100 million people speak Swahili either as a first or second language. It’s spoken in many countries in East and Central Africa, from The Congo to Kenya. If you find yourself in the area, or in a one-on-one with a beloved Swahili-speaker, tell them, Nakupenda.

I know, we said 10 phrases to say I love you. But learning sign language is something we can all do. And this way to say I love you is the easiest on the list. Here’s how: point to your own chest. Cross your hands over your heart. And then point to the other person. It’s that simple.

Now go forth and declare your love around the world. But remember, the language of love is universal, so if you get tongue-tied don’t worry. A goofy smile and an act of kindness go a long way.

If you’d like to learn more Spanish, German, English or French phrases, visit the Lingoda website and sign up for your free 7-day trial with our native speaking teachers today!