Thinking about moving abroad and Germany has caught your attention? We talk to Adriana, who moved to Germany from the states. She gives you her tips on how to best prepare for your move.

How to make the move to Germany

I moved to Hamburg, Germany 4 years ago from the US and it has been one of the best decisions I’ve ever made. It’s safe, quiet, and has great health insurance. However, the first year was pretty rough getting used to a whole new system and culture. Had I known how hard it was going to be, I probably would have done a bit more research in the beginning and learned more German before coming. So, if you’re planning to move to Germany, here are my top tips as an experienced expat to hopefully make things easier for you.

My top tips for preparing to move to Germany

Choose a location that suits your personality

Before you make a move to a new country, particularly if you’re not from the EU, it’s a good idea to visit there first and make sure the city you’ve chosen works for you. For example, in Germany there are huge differences between Hamburg and Berlin. Berlin is great for foodies, artists, musicians, and the general creative scene. There is always something to do in the evening there and it’s extremely international and English language-friendly.

In Hamburg things are a bit different. Although we do have one major area for nightlife, Hamburg is a relatively quiet city. There are still many expats, but the feeling is a lot less international than Berlin. You’ve also really got to know the good restaurants, otherwise you can end up with a miserable meal. I chose Hamburg, because of the quietness and many green areas that Berlin doesn’t have, so it does work for me. In general, it’s important to find a city that suits your personality, otherwise living there long term may not be such a pleasant experience.

My biggest piece of advice for anyone moving to Germany is to start learning German as soon as possible. Even though Germany does teach English to children from a very early age, many adults still struggle to speak the language in daily life. German is a requirement for any visa-related appointments with the foreigner’s office, so you’ll need to communicate in German there. If that’s not possible, bring a German friend with you, because you won’t be able to get your visa without German knowledge. Furthermore, most services in Germany are also only in English, such as mobile internet, WiFi, electricity, renting an apartment, and health insurance, so learning German is a worthwhile thing to do!

Make an appointment with the foreigner’s office for your visa

If you’re from the EU, you can skip this section. But if you’re not from the EU, you’ll likely need to apply for a visa to stay in Germany. For some nationalities, you have a period of 90 days to secure your visa. For other nationalities, you’ll need a visa before you enter Germany. In this case, you’ll need to contact your local German embassy for what particular requirements apply for your individual case. A list of which countries fall under each category can be found here.

Nonetheless, it’s likely that you’ll also need an appointment with the foreigner’s office in Germany either to apply for a visa or to follow up with the visa application. I highly recommend making an appointment well in advance of moving here, because wait times for appointments can be up to 4 months. Appointments can be made online through your local foreigner’s office (Ausländerbehörde). Alternatively, you can go there without an appointment, but note that you’ll need to arrive a good hour before they open to get in line and you’ll likely be there the entire day waiting to speak with them.

Keep all important documents on hand

Due to the stringent visa process, it’s a good idea to research what type of visa you’ll be applying for and what documents are required to apply. If you’re just starting out, check out the visa navigator for more information. When you move to Germany, it’s highly recommended to bring your original birth certificate with you, as well as if you have any personal identification paperwork. In the US for example, this would be the social security card. I also recommend renew your passport before you move if possible, since it can be easier to renew in your home country than through an embassy in Germany.

Make sure you can change your SIM card

Though the majority of newer smartphones are automatically unlocked, my first time in Europe a few years ago I found out that my smartphone wasn’t, meaning that I couldn’t change the SIM card for a foreign one. As a result, I couldn’t use any mobile internet on that phone unless I purchased a roaming package from the US, which is insanely expensive. I ended up having to buy a second phone to communicate with people while I was in Europe. So, before you leave your home country, make sure that your smartphone is unlocked.

Furthermore, I also recommend purchasing a German SIM card online before coming here. You can get pay as you go packages for super cheap such as with Vodafone. It also makes it simple to stay connected directly when you land and just swap out your SIM card.

Whenever you plan to move to a new country, saving money in order to do so is a very good idea. The cost for all the initial paperwork quickly adds up, plus you’ll need to pay a hefty deposit to rent a flat in Germany. Furthermore, for some visas you might also need to show that you have adequate financial means to provide for yourself in Germany over the long term. For example, student visas can require a minimum of 10.236,00 EUR to be put into a locked bank account (Sperrkonto) to even qualify for the visa.

Prepare your mindset for cultural differences

This one’s also a tip for anyone moving to a new country, but is completely applicable for Germany. As with any new country and language, there are so many cultural differences that you have to get used to. A big one in Germany is how direct Germans can be, which for some cultures can be considered offensive. Germans also expect everyone to be very one time for both business and personal meetings (actually even 10 minutes early). Another important cultural difference is that Germans follow strict adherence to the rules, even to the point of waiting to cross the street when there are no cars. If you learn to accept that it’s a different culture, and that you do have to somewhat change to live there, it’ll make the process a whole lot easier!

If you’re ready to make the move to Germany, prepare for your trip and take a Lingoda German course. Visit our website and sign up for your free 7-day trial today! 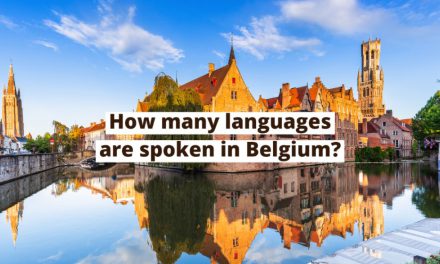 What Languages Are Spoken in Belgium?