How to Express Regrets in English Are you stumbling through English grammar wishing you’d learnt it when you were a child? Or maybe you’re thinking that you shouldn’t have eaten that dodgy-looking kebab last night?

It’s common to hear people scream, ‘NO REGRETS’ while jumping out of aeroplanes. And even more so when discovering they got the wrong Japanese characters tattooed on their arms. But regret is something we all feel. We regret things that we’ve done, and things we didn’t do. And something we feel sad or angry about what happened and wonder what we could have done differently. Often people also we regret situations in the present that we can’t change.

Whether your regrets are major or minor, it’s important that you can express them in English. So read on.

How do you express regret

The most direct way to say that you regret something is by using the word ‘regret’. English really is easy sometimes. ‘Regret’ can be a noun or a verb. Let’s have a look at some examples.

She had a few regrets about choosing the cheapest hairdressers in town when she walked out looking like barbie after an electrocution.

Her boss was a dragon so when she was offered a new position, she left her job with no regrets.

Now let’s imagine you agreed to help your friend move ‘a couple of things around’ on a Saturday evening. When you turn up, it turns out that he needs to move a grand piano, his great aunt’s china cabinet, and his four pet scorpions to a new cage. Here, we can use ‘regret’ as a verb. It is usually followed by ‘ing’.

Your reaction could range from: “I regret saying that I would help him,” to, if you’re a good liar, “I regret not pretending I was busy tonight.”

How to use wish and if only in English

Another way to express regret is to use the verb ‘wish’ or the structure ‘if only’. Let’s use these phrases to express regrets about the present. We need to use a verb in the past simple, or ‘could’, to do this.

“I wish I were Australian; then I could walk around barefoot 24/7.” Seriously, go to Australia and you’ll see Aussies without shoes in the strangest places.

Maybe you’re aiming high with your regrets: “If only I could speak better English, I would be able to watch Netflix without the subtitles.”

For regrets about the past, we can also use ‘wish’ and ‘if only’. Let’s imagine your dad’s taken all your family on holiday but, typical of his ‘short arms, deep pockets’ mentality, he’s tried to save some money.

“I wish dad hadn’t tried to save money on this holiday – everyone knows ‘rustic’ is a euphemism for ‘not finished’.”

“If only dad hadn’t been so tight-fisted, we would be on the beach right now instead of chasing cockroaches out of the kitchen.” 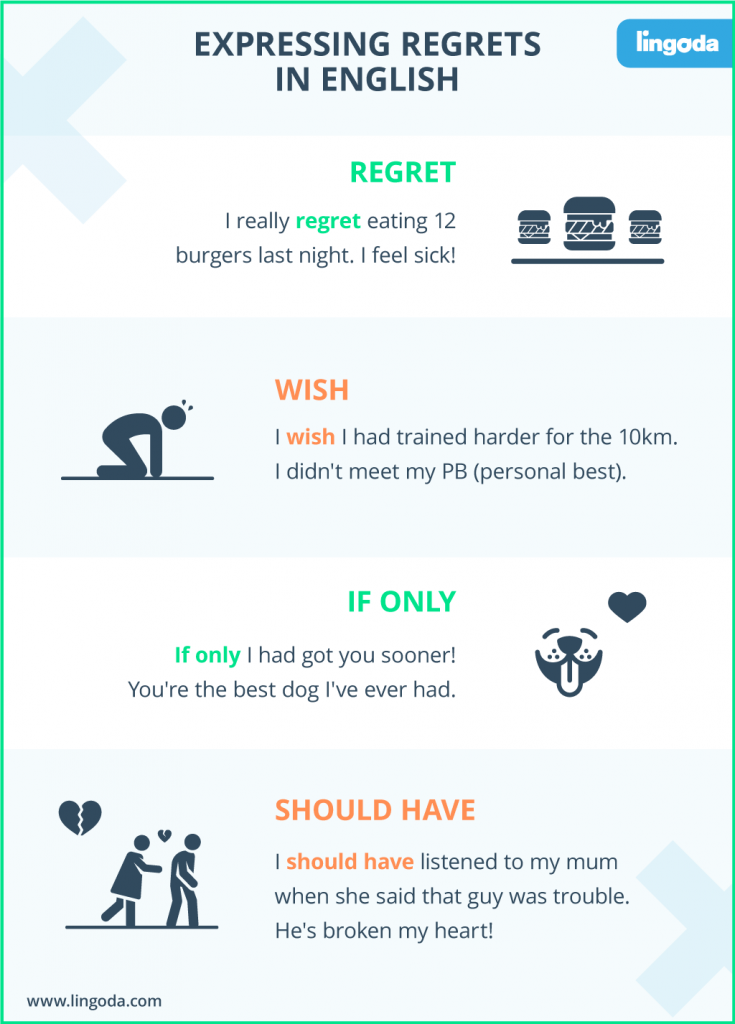 Should have in use

When you know what the sensible option was, but didn’t take it, you can express yourself using ‘should have’.

Let’s imagine that you return from an all-inclusive holiday where you really indulged yourself – and made sure that you got your money’s worth.

“I shouldn’t have eaten so much on holiday – I gained 10kg in 2 weeks.” Or perhaps, “I should have gone for the salad option at least once, but oh no, I was Mr. Cake-for-dinner.”

If you do start expressing your regrets in English, you’re likely to hear ‘shoulda, woulda, coulda’ at some point. These words can pop out in any order – one of the few times word order is flexible in English.

‘Shoulda, woulda, coulda’ is an English speaker’s way of telling you not to think about the things you ‘should have’, ‘would have’, or ‘could have’ done in any situation. It’s how we tell people not to worry about things they can’t change, and not to look back.

If you’d like to know more about the use of should, would, could and more, head over to the Lingoda website and sign up for your week trial. You’ll sound like a local in no time.