How Many People Speak Spanish? 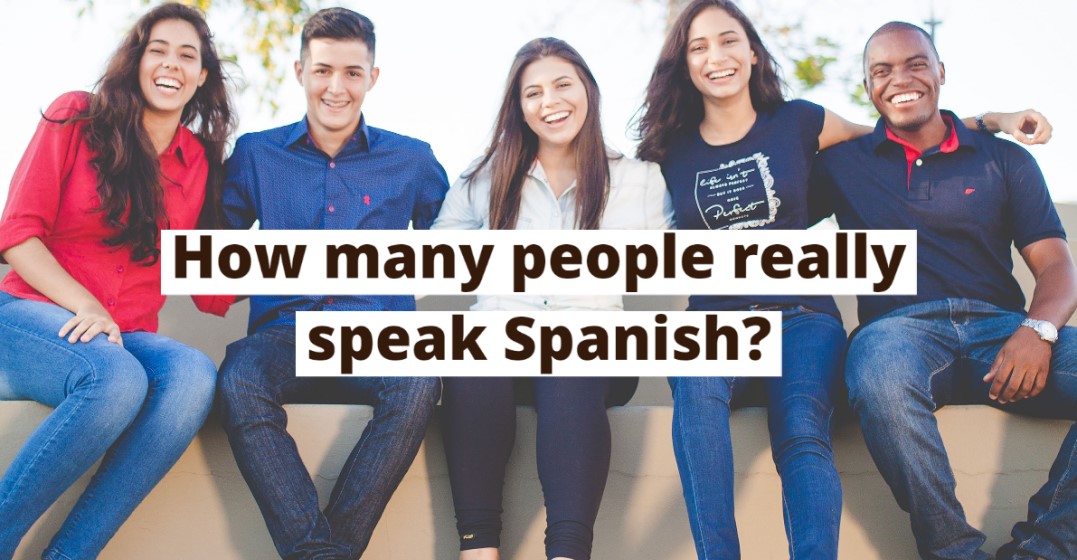 ‘How many people speak Spanish?’ is a well-searched phrase on Google. It has over 340 million hits. Before deciding to learn Spanish online or in a classroom, it seems people want to know if the effort is worth it. Alison, our Spanish specialist answers this important question.

Why should you learn Spanish?

As someone who grew up in California, I worked hard to speak Chilean Spanish fluently. Sure I got closer to my family, but studying Spanish opened me up to the wider world in a way I never expected. In February I went on holiday in Málaga, Spain. Walking around, finding the best nightlife, taking the metro, and friendly chats with servers at every tapas bar was easy. Why? It’s easy because I can speak Spanish. I was treated differently (and given better recommendations) than tourists who couldn’t. Effortless travel in Spanish-speaking countries is just one benefit, but well worth the effort I put in all those years ago.

How many people speak Spanish?

Spanish is a major global language. Over 6,500 languages are spoken in the world today, but Spanish holds a top place on the list.

In linguistic terms, Spanish is a Romance language categorized as a sub-family of Indo-European. One of the five main Romance languages that evolved from Vulgar (Common) Latin, Spanish joins French, Italian, Portuguese, and Romanian.

Modern Spanish originated on the Iberian Peninsula. It mixed Castilian dialects with Latin and Arabic brought during the Moorish conquests of the 8th century. By the 1200s, the standard Spanish language was formed.

Today, Spanish is extremely widespread. Depending on your source, Spanish is either the 2nd or 4th most spoken language in the world. Why the discrepancy? Research that counts only a single native language places Spanish 2nd. Research that takes bilingualism into account pushes Spanish back to 4th after English, Mandarin Chinese, and Hindi. With 534 million total Spanish speakers, knowing the language puts you in touch with a huge part of the global population.

Would you be surprised to hear the United States is #2 after Mexico? According to CNN, Hispanic people are the largest minority in the country. Defined as people with South or Central American or Spanish cultural origin, Hispanic or Latinx first and second generation immigrants are often bilingual and use Spanish on a daily basis. This includes me! Though English is common, the US has no official language. Spanish flourishes in border states and big cities like Chicago, Houston, Los Angeles, San Francisco, Miami, and New York.

Spanish is one of 24 “official and working” languages of the European Union. Of course it is spoken in Spain, which today makes up less than 10% of the world’s Spanish speakers. Elsewhere in Europe, Spanish is spoken in Andorra, a small country nestled between Spain and France. You will also hear Spanish in the British territory of Gibraltar alongside the Queen’s English, and even in Switzerland (over 2% of the Swiss population).

Spanish in the World

Remember that Spanish (like English and French) is common due to centuries of imperialism. As a result, other countries around the world with Spanish roots might surprise you.

Did you know that Spanish was an official language in the Philippines from the mid 1500s until 1987? Three million Filipinos speak Spanish while the Filipino language (derived from Tagalog) has a great deal of Spanish in it. You can hear Tagalog’s Spanish roots from numbers to kumusta or “hello” which sounds like ¿como esta? Chavacano, a unique local Spanish dialect, also remains a historical remnant from the times of the first arrivals of Spanish conquistadores to the southernmost islands.

Did you know there are native Spanish-speakers in Africa? In Equatorial Guinea, an oil-rich and strategically located country on the west coast of Africa, nearly 68% of the population speaks the official language of Spanish. Elsewhere, you can hear Spanish in formerly colonised nations like Morocco, Western Sahara, Angola, and South Sudan.

Why learn Spanish? According to the Washington Post, two-thirds of the world’s population share only 12 native languages including Spanish and English. Imagine the possibilities if you could speak 2 out of the 12 instead of just one. You could make a new friend on holiday. You could get a job and move to a whole new country. 534 million people worldwide speak Spanish every day. Are you ready to connect with them?

I mentioned how easy my holiday in Spain was thanks to speaking Spanish. It’s the same story when I go to Chile to visit family or head to Peru for a friend’s wedding. No matter where I go in the Spanish-speaking world, I feel comfortable. Chatting with locals and being at ease makes such a huge difference when you travel. Are you ready to put in some effort to get the same results?

To make a better connection with the Spanish-speaking world, visit the Lingoda website and sign up for your free 3 group Spanish lessons with a native speaker today.