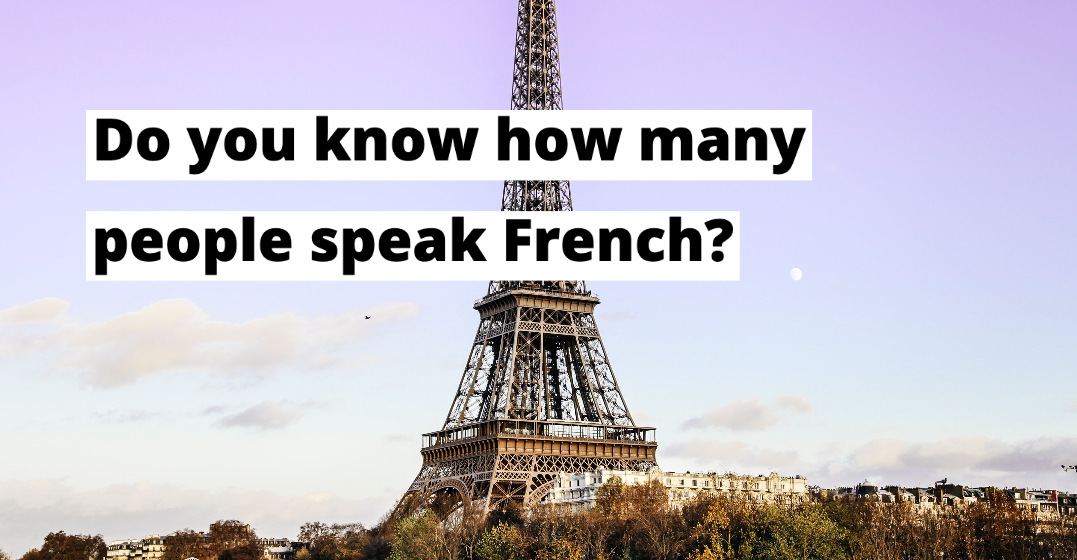 French is the world’s 5th largest language in terms of the number of speakers, after Mandarin, English, Spanish and Arabic. Along with English, French is the only language with a presence on all 5 continents. In 2018, in 106 countries and territories, 300 million people are able to express themselves and speak in French. Embark on this journey towards the “Francophonie”!

Where is French spoken to Europe?

Of course, I’m not going to tell you that in France, one of the official languages is French. You already know that! You also know that the Belgians and the Swiss speak French, not to mention some Luxembourgers. But speaking French doesn’t necessarily mean being a native speaker. Francophones (people who speak French) are everywhere in Europe: many Portuguese (thanks to immigration to France) speak French, and Poles and Greeks have often chosen to learn this language at school, which makes them fluent speakers of the French language!

Here is the number of French speakers in Europe, according to the Observatory of the Francophonie:

How many people speak French in Africa?

Africa is the continent with the most French speakers! Of the 300 million French speakers in the world, more than half come from the African continent! The French and Belgians have been very present on the African continent since the 19th century when they wanted to expand their colonial empire. As a result, French has been the language taught in schools and is still present there.

French in the Americas

The Americas (North and South) account for 6% of the global distribution of Francophones. France is present in South America with its largest overseas territory: French Guiana. France is also present in Central America, in the Caribbean with its paradisaical islands: Saint-Barthélémy (whose abbreviation is “St Barth'”), Saint Martin, Martinique or Guadeloupe.

In North America, the French language has been present since the 17th century in Canada, particularly in the province of Quebec. They are fierce defenders of the French language! In France, we use many and more English words (shopping, spoiler, pull over…) while in Quebec we have kept or invented new French words (magasiner, divulgacher, chandail…).

The use of French is a historical fact linked to the presence of French colonisation in Indochina. In Asia-Oceania, there are 1.7 million learners of French. 4 countries are strongly involved: Cambodia, Laos, Vanuatu and Vietnam. In India, in the province of Pondichery, you will find signs translated into French.

In this region of the world, there are other French paradise islands with New Caledonia and French Polynesia.

The future of French: why learn French now?

According to an OIF study, the number of French speakers is expected to triple in the next thirty years, and the language of Molière should become the second or third international language. There will be some 715 million speakers of French in 2050, or 8% of the world’s population, compared with 3% today.

Why such a development? First, because French is the second most widely learned language in the world, including in the United States, after Spanish. But also and above all, because the African population is expected to increase from 800 million in 2010 to 4.5 billion in 2100, according to projections by the Institute for National Demographics Studies (INED).

It should also be remembered that French is one of the official languages of the United Nations, NATO, the Olympic Games and Eurovision! It is also seen as one of the main literary languages.

So if every continent in the world speaks French, why don’t you?

Do you want to learn to speak one of the world’s most popular languages? Visit the Lingoda website and take advantage of our free 7-day trial offer. You can choose to take 3 group classes within 7 days, and all from the comfort of your sofa!