How Many People Speak Arabic Around the World?
by Maria Inês Teixeira
March 23, 2020 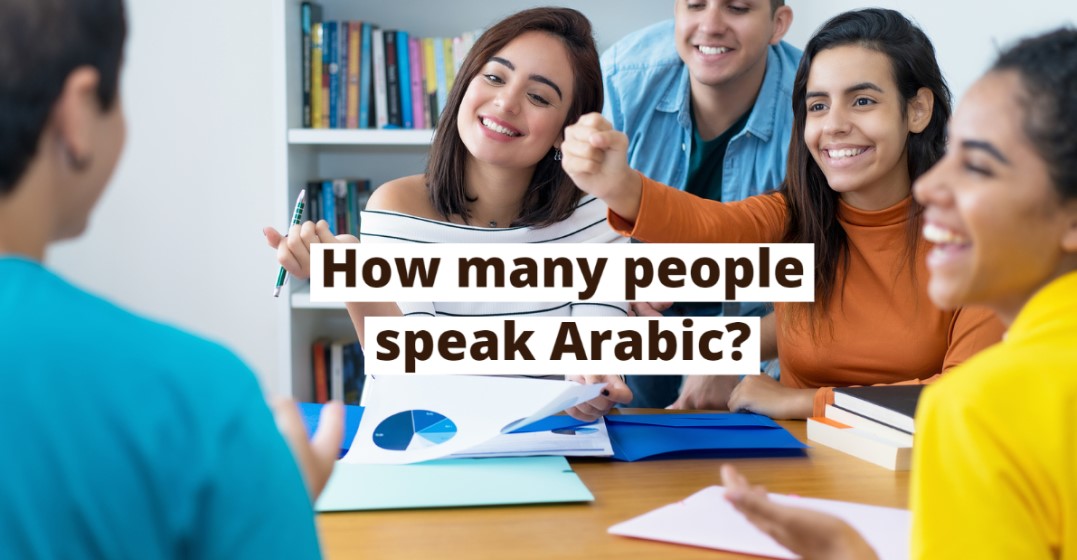 The Arabic language causes an impact everywhere it goes. Some find it charming and polite, others find it intense, many others see it as a challenge. But nobody can deny that Arabic has an incredible identity, as well as an epic history to back it up. Most of all, the Arab world is home to an incredible variety of cultures under its wings…but most outsiders don’t really know that!

Stay with us for a while, as we explain how many Arabic speakers exist in the world, as well as where you can find them. Where would you like to go next?

Is there more than just one Arabic?

Yes! To understand the Arabic-speaking world and its number of speakers, we must first know the difference between Modern Standard Arabic and its dialects. Modern Standard Arabic is the form you would find all over the media, the news, airports, diplomatic contexts and any formal procedures. Dialects, on the other hand, are used every single day for every other purpose.

However, unlike what many language books and courses claim, it is not the lingua franca of the Arabic world. When two Arabs from different countries meet, they adjust their dialects to each other, but rarely – if ever – do they choose Modern Standard Arabic. That is because many native Arabic speakers think Modern Standard Arabic sounds overly formal and old-fashioned. So much so, that many compare it to speaking Shakespearean English to a modern-day Scot or Australian!

Considering these definitions, let’s start our journey. We’ll be using the Ethnologue as a reference for our numbers and guide you through the Arabic-speaking world.

274 million people speak Modern Standard Arabic (native and non-native included). That makes it the 6th most-spoken language in 2020, although we know by now that most Arabs understand it, but are not unlikely to use it in everyday interactions. Nevertheless, you’ll find Modern Standard Arabic across the Arab world, as it is considered the language of the news, diplomacy and the media.

By far one of the most popular dialects to learn, Egyptian Arabic is spoken natively in Egypt and Sudan. It differs quite a lot from Modern Standard Arabic in grammar and vocabulary. The Egyptian Arabic dialect is spoken by a total of 68 million people around the world, making it the 26th most-spoken language according to the Ethnologue.

42 million people speak the Sudanese Arabic dialect, with native speakers being mostly from central parts of Sudan and parts of Eritrea. It is quite similar to the central and southern Egyptian Arabic variants and is classified as the 41st most-spoken language in 2020, which makes it the second most-widely spoken Arabic dialect after Egypt!

Maghrebi Arabic is spoken in North Africa, most precisely in Algeria, Libya, Mauritania, Morocco, Tunisia and Western Sahara. This group of dialects has come to grow further away from both Modern Standard Arabic and other dialects from the Arab world, making them extremely original and unique in sound! Of these, Moroccan and Algerian Arabic are the most widely spoken, with a total of 33 million speakers each.

Levantine Arabic dialects are often divided into two groups: North Levantine and South Levantine, although they are certainly mutually intelligible! North Levantine Spoken Arabic is one of the most popular choices for new learners alongside Egyptian Arabic due to its pleasant, melodic sound. It is spoken by a total of 25 million people. Most of its native speakers are originally from Lebanon and Syria. On the other hand, South Levantine Spoken Arabic includes the dialects spoken in Jordan and Palestine, at a total of 12 million speakers.

10 million speakers communicate in Gulf Arabic, but where can you find them? Most natives are from Iraq, Kuwait, Oman, and Saudi Arabia. Gulf Arabic is known to be the closest dialect to Modern Standard Arabic, as it sounds elegant, formal (in comparison to other dialects) and well-preserved.

Here at Lingoda we love helping you understand new cultures, travel without ever leaving your seat and knowing more about the world. Which Arabic dialect (or dialects!) would you most like to learn and why? Let us know on Twitter or Instagram!

At Lingoda, we offer you the chance to learn a language from the comfort of your home. Visit our website and sign up for your free 7-day trial with our native speaking teachers today!