How I am learning French with Lingoda. 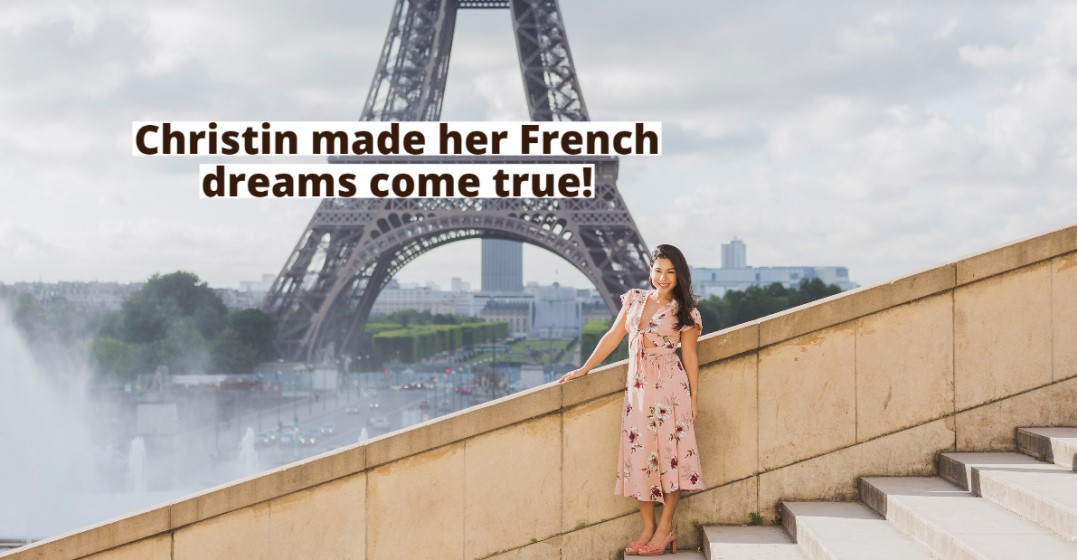 We recently met Kate, a Lingoda German student, who shared her experiences of moving to Germany and learning the language. Now we meet with Christin who is currently learning French. She shares her tips and tricks for getting on the right path to fluency.

Acquiring new languages has, for me, always been an exercise in survival, it’s a struggle to find confidence in a world where everyone speaks the same language and I’m the odd one out.

My first struggle with learning a language was when I moved to Italy in 2015 and had to learn Italian from scratch. Luckily, I had good teachers and was immersed in the country so learning came easy and fast. However, when it came to French, the process was not easy and I tried practically every learning method out there so that I could try to communicate.

Ultimately, the desire to be understood and try to survive everyday French interactions fuelled my learning, I just had to find the right method that combined all the elements of language learning I knew worked for me.

I always thought French was a beautiful language, but acquiring it seemed like a dreamy, far off goal, until I met my Franco-American husband. Even though I spoke English with him and his family in the U.S., it was common to hear dinner table discussions in French. I never understood a word.

My French learning journey began with an online language app. It was a fast, easy way to learn words and phrases that I thought would serve me at those French family gatherings. But when it came time to speak, I struggled to understand what anyone was saying. I felt paralyzed when asked questions and could only manage a meek “oui” or “merci”.

I stepped up my learning when my husband and I became engaged. I found some in-person beginner French classes and I purchased books to supplement my learning, all while still using language apps and well-known computer language programs. Even as I was laying the groundwork for my French, I would tense up when speaking spontaneously, cringing at every pronunciation faux pas I made.

Once married and with a French visa, I underwent a series of required French integration classes – entirely in French. Nervous and desperate, I got an online tutor, a native speaker with who I could practice conversation. My tutor also helped me prepare for a French language exam where I needed a specific language level to receive a multi-year French resident permit. Once again, I stuck my nose in my books, memorised the conjugation tables and chatted in French with whoever I could, but unfortunately, I could feel my confidence in speaking was still lacking.

Thankfully, I passed the exam, but I was left feeling exhausted. Right before the exam, my French tutor informed me she would no longer be teaching, so not wanting to lose the progress I’d made, I went in search of a different option, and that’s when I heard about Lingoda’s Sprint promotion.

A YouTube vlogger explained the programme’s benefits and how it helped her achieve a required level of French. I was intrigued, so I signed up for a free trial, and then the Super Sprint. From the initial lesson, I was impressed with the variety of lessons, the natural course progression and class format. The language platform had all the benefits of real time class instruction, but from the comfort of home, and with the added benefit of flexibility – to choose which teachers and which times worked best for me.

After the first few weeks, my husband remarked on how much my confidence with French speaking and pronunciation had improved. Challenging myself to speak French everyday with real people in a classroom gave me the practice, and safety net, I needed to boost my language confidence. I also met some interesting French language learners from all over the world. The rapport with certain teachers and students made the lessons so enjoyable.

In the future, I would love to see Lingoda promote those human connections made in the online classroom and facilitate meet ups among students, who live close to one another, so they can continue their speaking practice. Also, adding a few other languages would be great as I’ve already recommended the programme to my Spanish-speaking and Italian friends.

I’m grateful I discovered Lingoda. I only wish I had learned about it sooner. Now, when I have French interactions, I don’t feel paralyzed as I once did and I have the confidence to ask questions and be more curious about a language that I never thought I would be able to speak.

If you’d like to follow in Christin’s footsteps, sign up for the Lingoda Sprint and have the chance to earn up to 100% of your money back!