Healthy English food to get your taste buds tingling 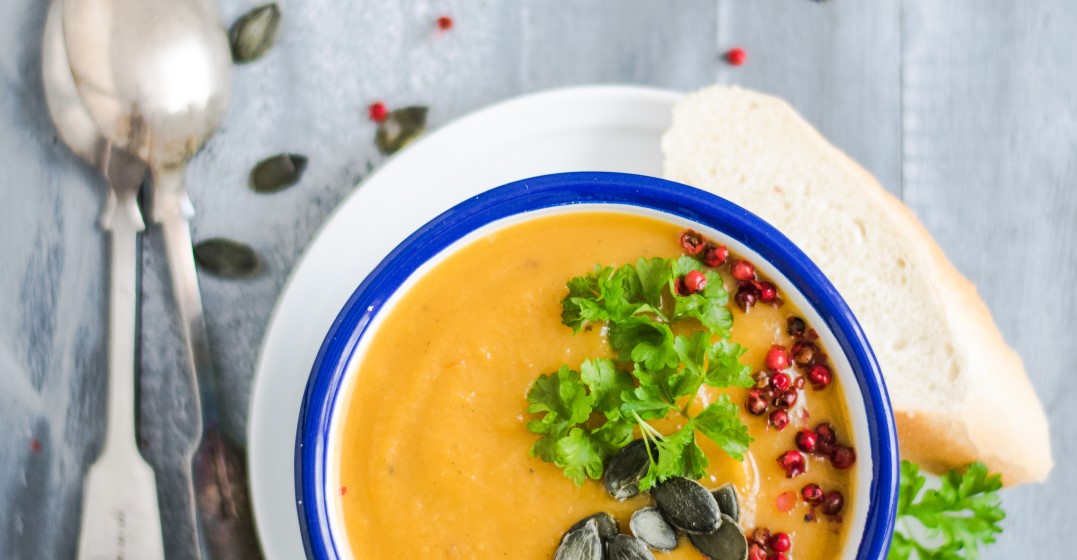 This is a very fresh tasting soup and is best when it’s made with really good, British watercress. The soup might look a bit intimidating at first because it’s bright green, but it’s brilliant for summer. Watercress has a strong, peppery taste, it’s low in calories, fat and carbohydrates and full of vitamins. Some recipes say to add double cream to the dish, but to keep it light you can skip this and add creme fraiche instead. It’s a really good British starter.

This is another bright green soup – maybe we’re trying to make a contrast with the grey British skies! Pea and ham could be the winter green soup; it’s more filling than the watercress one above. The two main ingredients of this soup are unsurprisingly peas and ham, but it also has leeks, carrot and celery usually too, so lots of vegetables. Again, you can swap out the double cream to make this soup lighter.

Cheap, comforting and perfect for winter, stews are a healthy choice when it comes to British food. Stews can include almost any vegetables, like carrots, potatoes, mushrooms and tomatoes, and they often have meat in too. Beef and chicken are popular meats to use. This is all cooked gently for a few hours in liquid, usually stock and sometimes a little wine. It’s a low fat, healthy meal packed with vegetables – and it’s delicious!

Pies in all shapes and sizes are staples in British cooking. But most of them aren’t exactly healthy – steak and ale, I’m looking at you. Fish pie, on the other hand, is a traditional but fairly healthy take on the pie theme. Fish pie is made with white fish in a cheese sauce with mashed potatoes on top, baked in the oven. It often has hard boiled eggs or prawns in it too. It’s not super low calorie but the ingredients are simple and made from scratch it’s really tasty. It’s usually served with green vegetables on the side, adding a healthy splash of colour.

You might be thinking, hang on a minute, that doesn’t sound British. And you’re right of course; tandoori cooking originated in India, but Indian food is a firm favourite in the UK. However, most curries, especially from a restaurant or takeaway, are not healthy at all. One of the healthiest options for Indian food is definitely meats cooked in the tandoor – a clay oven. These meats are marinated in yoghurt and spices and then put onto skewers and baked. If you eat tandoori chicken with plain rice or chapati instead of naan bread, it’ll be a pretty healthy Indian meal.

It’s very common to eat pork and apple together and it’s often seen in sausages in the UK. But, sausages aren’t really that good for you which is why you might want to eat roast pork instead. If you choose a lean cut of pork and cook it in the oven along with the apples, it makes a really good and quite healthy English dish. Roast pork and apple is a popular sandwich filling too.

Puddings aren’t usually healthy but a summer pudding has so much fruit in it, it’s almost good for you! A traditional English summer pudding is made with lots of different seasonal berries: blackberries, raspberries, strawberries and redcurrants are all usually mixed in together. These fruits are cooked together with sugar – don’t use too much to keep it healthy! The outside of the pudding, or the bowl, is made with bread which is dipped in the fruit juices. Super fresh and tasty, and much healthier than other traditional English puddings like sticky toffee or a treacle tart.

Have you ever tried any of these dishes? Or are you tempted to try them the next time you’re in the UK?