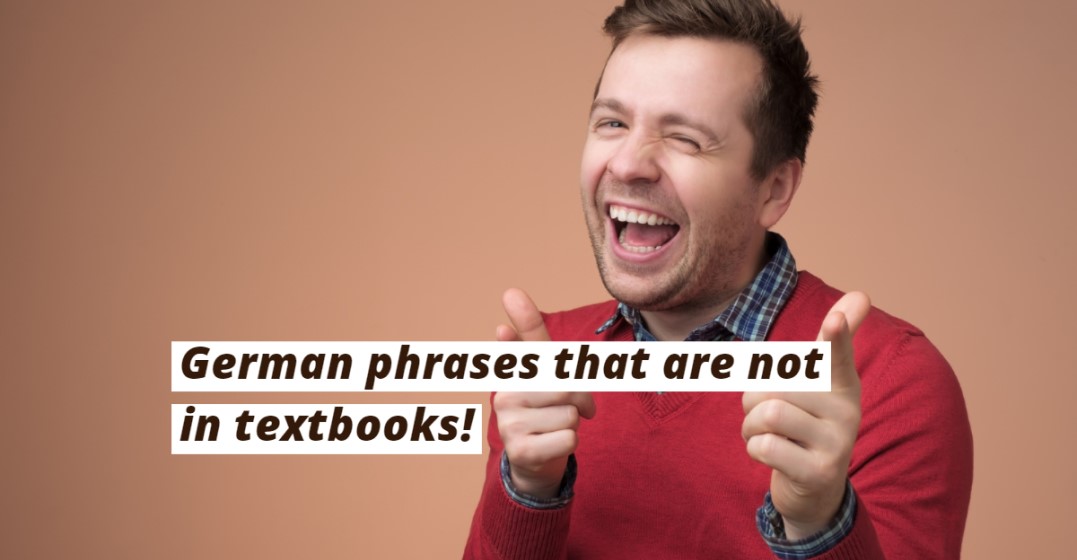 Funny German phrases that are not in textbooks

I learned French for almost seven years in school. I could write an essay about the hidden character traits of Camus’ Stranger, and give a more or less eloquent abstract of Hugo’s Notre Dame de Paris.

So, I thought, my French was okay… and then I moved to France.

Here, I had to handle my daily life in French: Go to a bakery and ask for a baguette, for example (“Je suis un baguette”- imagine the laugh they had, when the German stood at counter telling them, she was a baguette…) or yell at the crazy French drivers who I owe some nice little near-death experiences on my bike to.

In Berlin, I would just yell some pleasantries involving the lower back parts of the person’s body, but here, I was speechless.

Then, I realised my students are in the same situation. Of course, I try to teach them more useful phrases than what I learned at school, such as slang or little non-dangerous insults.

I generally try and refrain from insulting, or being sassy, to people most of the time (although, a quick Scheiße! (Shit!) escapes sometimes, when I’m a bit late or forgot my markers at home). But that is not how it will be in real life.

So here, you’ll find a quick non-textbook guide on how to be verbally not nice at times.

German phrases for when you need to react quickly

This exclamation is often preceded by the sound ey (oy) to get the person’s attention. But ey could be combined with a lot of other words or sentences.

Ey, Alter! – Oy, Dude! Literally: Oy, old man. You could use that when someone shoves you without excusing, for example.

One of my favourite insults is a derivation from Arsch:

(Du) Arschgeige! – (You) arsehole/idiot! Literally an arse-violin. When you think about its literal meaning, your imagination starts showing you really funny things which help me being less angry.

But you don’t even have to use bad words to be sassy: Rolling your eyes combined with a Jaja – yeah, yeah (make sure, the “a” is really long!) can do wonders when you want to make people understand that you don’t really believe or care about what they just said.

I can do that very well when my darling gets a bit angry and calls me a Trantüte – slowcoach (literally a bag full of whale blubber) again, because it takes me so long to get ready for going out.

Me, I only get angry at the Rotzlöffel – brat (literally a spoon of snot) of our neighbours, who loves throwing all of his toys on the floor at 7am. Every morning.

Ah right, and at the deadly French car drivers. If you find an exemplar of this species in Germany that is also driving a high-prized car, you might call him Lackaffe – smoothy, literally a varnish-ape. Usually, these are people, who put tons of gel in their hair to get the perfect side parting and wear yachting shoes even in winter.

German phrases for when you have more time

Of course, there are not only single-word-exclamations if you want to express your anger. About the the little Rotzlöffel, you could also say:

Or imagine being in a club and a Lackaffe is approaching, hoping to dance with you: A nice Träum weiter! – Dream on! maybe in combination a long disparaging look will do the trick of getting rid of him. In case it doesn’t and he starts talking about how amazing he is and other stuff, that really annoys you, your last resort is:

And instead of „jaja“-ing my boyfriend, I could also tell him:

Den Teufel werd ich tun! – I am NOT going to do that, literally: The devil I will do! – when he asks me to hurry up.

Ihr versteht nur Bahnhof? – You have no idea what I was saying?, literally: You understand only train station?

Well, time to start learning this crazy funny language, where salad can be what we deserved Da haben wir den Salat!- Now, we got what we deserved! Literally: Now, we have the salad.

Now is the time to put your new found knowledge into practice. Perhaps our teachers wouldn’t appreciate being insulted, but they’d definitely like to help you sound more natural.