Although most French people can understand each other very easily even when talking to somebody from a different region (which might not be the case in countries such as German-speaking ones where regional dialects are more distinct from each other), several French words have very region-specific variations that you need to know! Included in this are slang words.

You will find some of the most important slang words and expressions below.

Le Gorafi is a pastiche of a news network which publishes fake news about France’s political landscape. One of their most popular articles’ title reads as follows “Toulouse: man gets shot 46 times for ordering a “pain au chocolat”” This sweet roll filled with chocolate is, indeed, called a chocolatine in the south-west of France, as illustrated by this map which details the usage of both terms. It is one of the most widely debated (and joked about) regionalisms in France and, brace yourselves, there is even a third way to describe that pastry: in the northern part of France, it is called a “petit pain”- literally a small loaf. Therefore, you should be careful and  choose which word to use wisely when ordering one of these delicious treats at the bakery!

This is also a word which strongly varies, and all three versions are used to describe a pencil. “Crayon à papier” (also “crayon de papier”) means “paper pencil” and is used in most regions, including around Paris. “Crayon gris” means “grey pencil” and is the prefered term in southern regions, while “crayon de bois”, literally “wood pencil” is the word they employ in the north of France.

All of these words are French translations of the English word mop. Serpillère is the most common term and is particularly used in Paris and the Ile de France region. In the north of France, “wassingue” is used a lot and originates from the Ch’ti dialect that used to be spoken there. Nowadays, however, it is only spoken by members of older generations who live outside of cities. In Marseille, in the south of France, people use the word “toile” to describe this item, while other areas from the south-east call it a “pièce”.

In most areas, “coffre” is the translation of “trunk” (American English) or “boot” (British English) in the context of cars. “Malle”, literally “steamer trunk”, is the way car trunks or boots used to be called in French in the past. However, nowadays, “coffre” is the most widespread word while “malle” only remained in use in south-western France.

“Pélo” is a very local slang term that is almost exclusively used in Lyon and its suburbs. It is used the same way as “guy”, “dude” or “mate” in English ; meaning people use it to mention or shout across to a male friend.

Plastic bags also have different names across France! This map shows which term is preferred depending on each region. “Sac” is the most widespread word that is used, while “sachet” is used a lot in northeastern region Alsace and “poche” is used in the same regions as the ones who call a “pain au chocolat” a “chocolatine”.”Cornet” (literally “cone”) is used in French-speaking regions of Switzerland and therefore also in France’s neighboring areas.

“Bouiner” comes from the Normandy region and means “to mess around”, or to do nothing productive. This verb is used in the sentence “Qu’est-ce que tu bouines ?” which means “What are you up to?” or “What are you doing?”. Similarly, the word “bouineur” comes from “bouiner” and is used to described somebody who doesn’t do much, has troubles focusing and never finishes what he started.

“Schlouk” is an Alsacian word that comes from the German term “Schluck”. In Alsace, local slang and colloquial expressions are strongly influenced by the German language because of the geographical proximity of that region to the border.

“Schlouk” means “sip” or a small portion of liquid.

This expression is typical for the northern region of France. When friends are trying to make plans and one of them wants to confirm or make suggestions later, they would say “Je te dis quoi”. Literally, this translates to “I will tell you what”, which of course doesn’t make any sense and is actually not understood by people who have never lived in that region – before hit movie Bienvenue chez les Ch’tis, that is! That movie has a well-known scene in which the expression is used, leaving the main character, who originally comes from  the south of France, puzzled. Watch it here!

“Adieu” means “farewell”, but it is used to say “hello” in several southern French regions such as the Provence, which can be confusing for people from the northern half of the country. Don’t use it as a greeting in Paris or you might get some funny looks from people thinking you are wishing to never see them again!

“Gavé” is a word which is typically used in and around Bordeaux as a synonym for “a lot”, “many” etc. For example, “c’est gavé bien” means “this is very good”, and “il y a gavé de monde” means “this place is very crowded”.

“Fada” is from Marseille and used to mean “touched by the fairies” in old Provençal dialect.

Nowadays, it is used to describe someone who is not very clever, naive or crazy. However, it can sometimes be used affectionately, so don’t feel hurt if your friends uses that word to describe you!

Also, “être fada de (…)” means “being a fan of (…)”, so feel free to tell your friends “je suis fada de l’OM” if you are into football and want to make them happy. However, do not, under any circumstance, say that in Paris – as you know, Paris and Marseille are the worst enemies, as far as football is concerned. 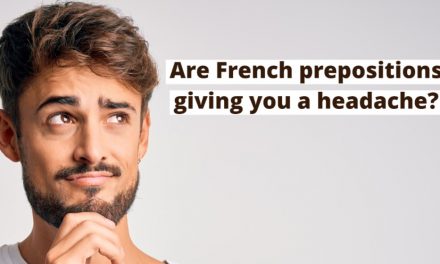 French preposition errors (and how to avoid simple mistakes).

Can the Phonetic Alphabet help you?

10 Spanish jokes guaranteed to get a laugh