One continent, 44 countries and hundreds of languages

Today is the European Day of Languages, organised by The Council of Europe.  As well as celebrating cultural diversity it’s a there to remind us that learning a new language is possible, at any age.

Here at Lingoda, we speak more than 50 languages, including Croatian, Latin, Georgian, and Irish. And of course, we are huge advocates for learning. Many of our team speak a second, third or even fifth language! Although we’ve got some catching up to do. There are around 225 indigenous languages in Europe alone.

It’s also an opportunity to remember all the positive aspects of learning a new language. You’ll grow in confidence, make new friends, and open the door to a new career. Language really is that important – and powerful.

Of course we’re also language geeks! We love learning crazy facts and mind-blowing vocabulary. And who better to ask about European language trivia than the Lingoda team. Here are their top European language facts, and also their favourite words in English, German, French and Spanish (the languages that you can learn online with Lingoda).

10 amazing facts and figures about European – and other languages

If you would like to become bilingual, plurilingual, or a polyglot, check out our website today where you can find information on all of the courses we offer.

European words that do not have a direct translation in English 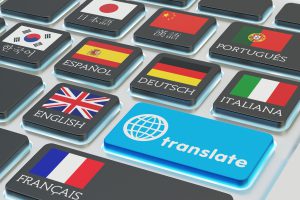 A man hired by women to break the news to their husband or boyfriend that they are dumped. The literal translation is “separation agent”.

Someone who leaves a restaurant without paying the bill.

The joy of meeting someone after not seeing them for long time.

The act of weeping and singing at the same time.

A phrase to describe unrequited love

When someone pays you a compliment on the street.

Wearing or using something for the first time.

Suffering from sleep deprivation, or being unable to sleep.

Do you have any words in your native language which cannot be translated into English? We would love to hear from you. You can engage with us on Twitter, Facebook and Instagram.

If you’d like to find out more about the language courses we offer, head over to our website and sign up for your week-long trial today.