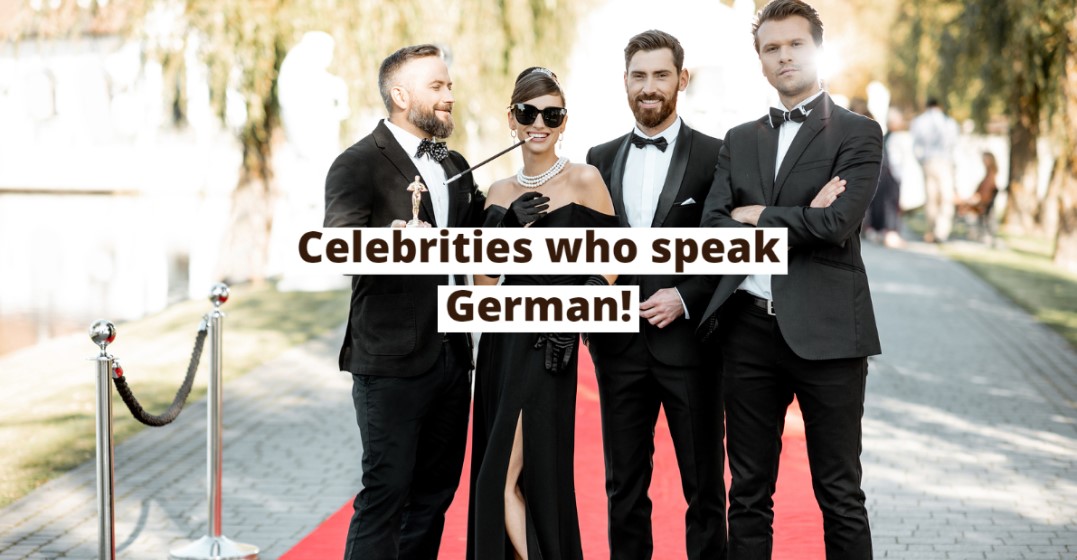 The German language has quite the stigma of being difficult to learn. With many words for the English word “the”, including the gendered articles of “der, die, and das”, many struggle to learn the language due to its complexity. Nevertheless, there have been many Hollywood Celebrities who’ve managed to master it – and even speak it on stage and during interviews. If they can do it, so can you!

You’ll know him from the famous love story alongside co-star Kate Winslet in the movie “Titanic”. While his full name doesn’t sound it, his middle name “Wilhelm”, definitely captures the German spirit. Despite that he doesn’t speak German in the movies, Leonardo Dicaprio has a strong German background. His grandparents on his mother’s side were German, his mum is German, and he often visited Germany up through his grandmother’s death in August 2008. Spending his summers in the small village of Oer-Erkenschwick, he was quite close to his Oma Helene. During a publicity tour for the movie “Gangs of New York”, German TV interviewers were starstruck when he began reminiscing about his time with his beloved Oma, as well as his favourite foods (Weiner Schnitzel and Spätzle) completely in German.

Natalie Portman has been known as a bit of a perfectionist on and off stage. Famous for her role in “Black Swan”, she not only speaks German, but also Hebrew, Spanish, Japanese, and French. During her publicity tour in Germany for “Star Wars”, she had fluid conversations with interviewers in German. Quite the brainiac in general, she grew up in Israel and then later on graduated from Harvard. She was already serious as a kid about knowing exactly what she wanted to learn and did it. She has been quoted as saying “I’m not a perfectionist but I’m definitely, or well, I like discipline. I’m obedient. I’m not a perfectionist.” Six languages later, certainly no one can object!

Named People’s Most Beautiful Woman in 2015 and one of Time’s 100 most influential people in the world in 2010, Hollywood superstar Sandra Bullock is very familiar with the German language due to her German mother. She even had dual American/German citizenship up until 2009. She spent 12 years in Nuremberg during her childhood when her father worked at the military base. Videos of her speaking on stage in German prove she’s basically like a native speaker, though if you ask her more recently, she says she’s a bit “rusty”.

Famous “Die Hard” actor Bruce Willis was also born in Germany on a US military base and his mother was from Kassel. That being said, the family left Germany when Bruce was only two years old, so it’s hard to tell if he’s retained much up to now. Although German is technically his native language due to this birthplace, German interviewers described his language capability as “broken”.

Known for his Irish-German roots, Michael Fassbender actually spoke German in the film “Inglorious Bastards”. Though born in Germany and with a German father, he spent most of his childhood in Killarney, Ireland, so he doesn’t consider himself a German native speaker. While preparing for “Inglorious Bastards” he needed the help of a vocal coach to polish his accent so he didn’t sound so Irish. When German interviewers asked how much he had to prepare for the role, he replied, “Am besten spreche ich Deutsch, wenn ich etwas betrunken bin” (I speak German the best when I’m a bit drunk).

The famous rock n roll legend Bruce Springsteen can trace his German language roots back to a speech he gave in 1988 after the fall of the Berlin wall – completely in German. He had written the short speech down on paper phonetically to help with pronunciation. The crowd roared in approval after his 4 hour concert. Though not responsible for taking down the Berlin wall himself, he certainly added major fuel to the fire!

This rock n roll star definitely speaks fluent German due to his mother’s teachings. Born in Israel as Chaim Witz, he moved to the US at 8 years old and changed his name to Gene. His mother and uncle were Hungarian and survived concentration camps during WWII, so they all were able to speak Hungarian, German, and Hebrew. During German interviews, he does speak German quite fluidly so it seems the language stuck!

Although Tina Fey spoke a decent amount of German for her role in “30 Rock” as Liz Lemon, she isn’t quite capable of speaking German in real life. She also managed to coerce her co-actors to speak German as well. Unfortunately, native German speakers can hear that many of the phrases aren’t quite grammatically correct and she struggles with the pronunciation. But at least she tried!

“Sex in the City” star Kim Cattrall was born in Liverpool. However, she spent the 1980s in Frankfurt with her second husband and learnt German. At the time she was quite fluent, but now she says she has forgotten most of it. Since then, she has spoken on stage and done interviews in German, but she avoids it more recently, because she is shy about making mistakes.