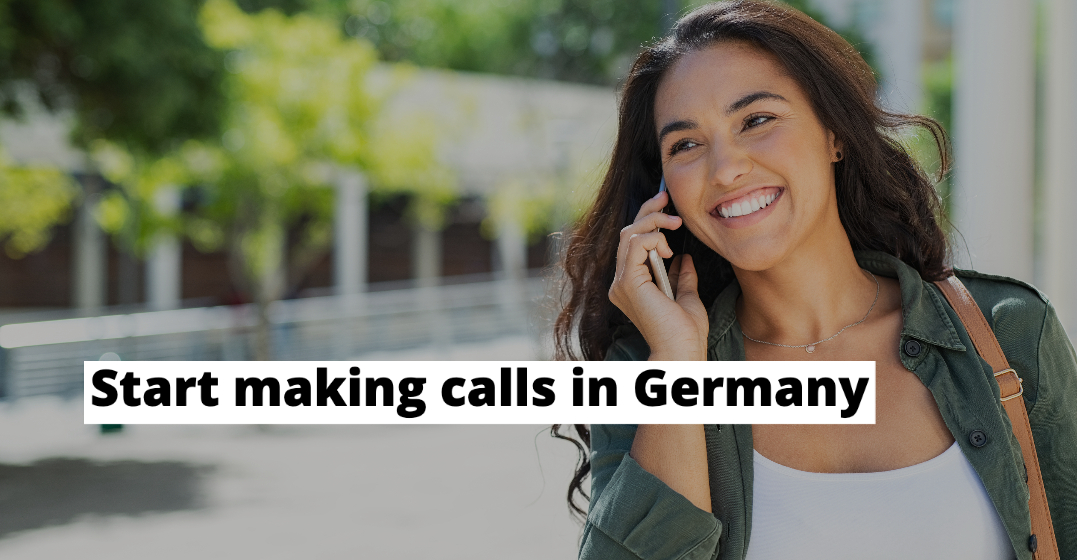 So you’ve just moved to Germany and you’ve got this big pressing question. Do you switch to a German mobile provider and if so, which one? It can be hard to know which phone company is the best, what will suit your needs and what will give you the best coverage. So we’ve compiled a list of the best mobile providers in Germany to help you on your way.

First steps to choosing your mobile provider (Mobilfunkanbieter) in Germany

There are a few things you need to think about first.

This all may seem a little daunting, but it is possible to get a German number and find a mobile provider without having to donate your right kidney. However, if you’ve just arrived, give yourself some time to settle before diving into this. If you’re here and you’re ready, then let’s have a look at the best mobile providers.

How to choose the best German mobile provider

There are a lot of networks (die Netzwerke) in Germany. Many of the smaller ones are subsidiaries of the bigger companies. The main thing to know is that there are four main providers in Germany:

Possibly the most expensive of all the networks, it has been rated Germany’s best provider of network coverage for several years. If you’re going to be living in a remote part of Germany or travelling a lot around the country, then Deutsche Telekom is worth paying that little bit extra for.

Other perks include very fast mobile internet with LTE speed. Deutsche Telekom offers LTE with 100Mb/s, in comparison with many other companies that offer only 50Mb/s. They also have good offers (Mobilfunk Angebot) for people under 25 years old. And lots of different plans to choose from, where you only pay for what you need.

If you don’t want a contract but just a prepaid sim, one of the subsidiaries of Deutsche Telekom is Congstar. It has lots of different plans for great prices that suit your needs. You can buy it online or in T-store, Kaufland, Real and Netto. There’s also Edeka Smart, which can be bought online or at an Edeka supermarket!

Not only has 1&1 been voted the best mobile provider in Germany for several years now, but it is known for its excellent customer service and its ability to offer different network options (die Netzwahl). It uses the same network as Deutsche Telekom, which is called D-Netz. While this is slightly more expensive than E-Netz, it provides you with that great coverage in more rural areas.

However, you can choose the E-Netz network as well. With plans starting from as little as €9.99 a month, you get a great deal and good network quality in the city. There’s also a third option – LTE Max, which provides 225Mb/s, so it’s faster than the other three. And this option currently has four different plans to choose from. You can also sign up for a prepaid plan that you can cancel on a monthly basis.

This international network is often the most expensive to buy in the long run. With good offers up front, you need to read the fine print and see how much you’re charged outside of your allotted minutes. However, if you travel a lot in Europe, Vodafone is a good network to use as it has a presence in many European countries. Also, you can benefit from an even better deal if you buy your home internet through Vodafone as well.

Vodafone also has several subsidiaries offering prepaid plans, one of which is O.TEL.O, which can be bought at Media Markt and Saturn. This plan also offers good deals for those under 28 years old.

There are many benefits to having your plan with O2. Firstly, they provide flexible contracts between 1 to 24 months, so no signing up to a contract that you can’t get out of. They have cheap packages to start with and fast mobile internet speed with LTE. However, they are known to only have good reception in large cities. And the better deals such as faster speed etc are more expensive. But as one of the largest providers now in Germany, there is a strong possibility that a lot of your friends are signed up to them. Which means you will most likely have free calls and texts to their phones.

Like a lot of the other networks, O2 also has a cheaper, contract free subsidiary company called Tchibo. Where you can choose from different tariffs that meet your particular needs, such as low cost or lots of data.

If you’re looking to move to or visit Germany, you’ll need to get to grips with the language. Visit the Lingoda website and sign up for your free 7-day trial with our native speaking teachers today!