5 Financial Idioms in English and Their Origins
by Lingoda Team
March 12, 2020 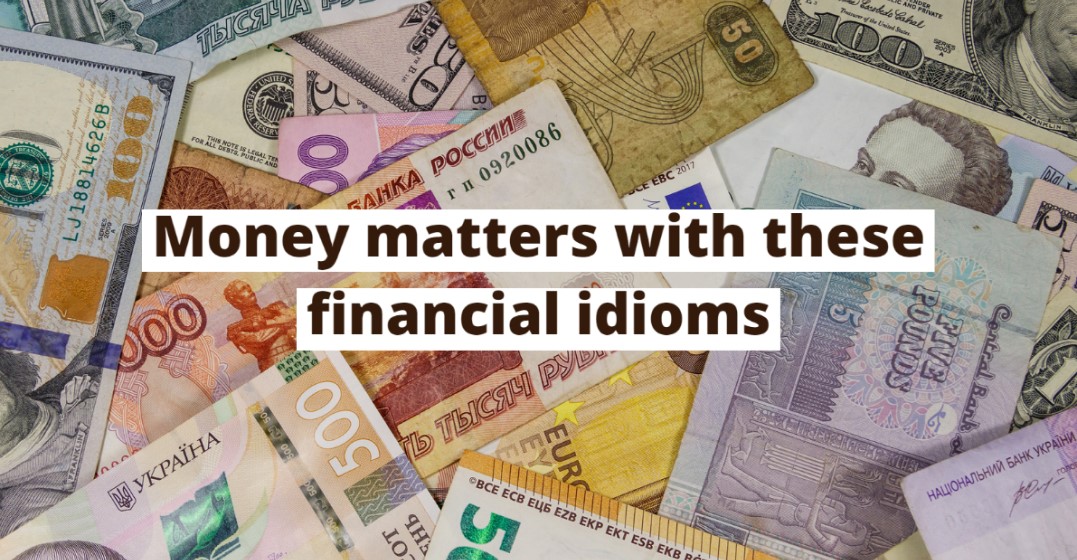 An idiom is a phrase or saying that has an ulterior meaning, that different from the literal meaning. Idioms are not entirely necessary to learn to be able to understand texts or hold conversations at an entry level. However, if we wish to develop an advance knowledge, we must expand our understanding of English idioms, as they are frequently used by native speakers, especially in casual conversations.

What are financial idioms?

As we mention in our page about English Idioms, many of them have some historical or cultural context and origin to it. When learning a language, taking culture into account is one of the most helpful and beneficial ways to boost progress. Surprisingly enough, a ‘gravy train’ was never a rush to a roast dinner, and ‘making a mint’ never freshened your breath.

In and across the English language, there are many phrases and sayings that we still use every day with strange meanings – and even stranger origins. If you’re curious as to why we ‘bring home the bacon’ and ‘be paid peanuts’’, you will find all your answers below. And if you wish to discover even more sayings and idioms related with the financial field, do not miss on the original full post written by Ashley Fleming in the Vouchercloud blog. You can read it here.

A Bird in the Hand is Worth Two in the Bush

The Definition – What Does ‘A Bird in the Hand’ Mean?

To be satisfied with what you have, rather than taking a risk and potentially losing out entirely.

The Origin – Where does ‘A Bird in the Hand’ Come From?

This one isn’t quite as simple as you’d expect. Of course, it is pretty difficult to catch wild birds and therefore having one in your hand is definitely much more valuable, but that’s besides the point.

The true origin of the phrase “A Bird in the Hand is Worth Two in the Bush” dates back to medieval falconry, where the bird in your hand – a bird of prey, and an expert hunter – was always worth more than any two birds out in the wild (the prey). However, the term also appeared in 13th Century Latin (referring to ‘In the Woods’ rather than ‘in the Bush’.

The Definition – What Does ‘Bringing Home the Bacon’ Mean?

Someone who works and earns money for their family; typically the sole or primary earner.

The Origin – Where does ‘Bringing Home the Bacon’ Come From?

Despite being such a wonderful phrase, the origins of the term “Bringing Home the Bacon” are still disputed.

The most commonly received explanation of where “bringing home the bacon” comes from builds upon ‘bacon’ being a slang term for one’s body. Associating your ability to earn money and make a living with the health of your body led to ‘bacon’ gaining that connotation too. Boxing was a great example of earning a living using your body, and the most frequently documented uses of the phrase come out of the sport of boxing throughout the early 20th Century.

Others believe that 12th Century England holds the truth, with the town of Great Dunmow in Essex hosting an annual competition where a ‘flitch’ of bacon would be offered to married couples who evidenced true marital devotion. Any man who showed he had not argued with his wife for a year and a day would, literally, bring home the bacon, in honour of a local couple who inspired the tradition years before – with a display of marital prowess to the mayor so wonderful, it truly deserved a meaty reward.

Alternately, some believe that the origins of ‘Bringing Home the Bacon’ belong to the 1500s, with country fairs across England hosting a traditional ‘greased pig’ competition. Long story short, this involved chasing wildly after a greased pig, with the winner being able to keep the slippery swine. That’s a whole lot of bacon to bring home.

The Definition – What Does ‘Fool’s Gold’ Mean?

Something mistakenly believed to be full of potential or potential reward.

The Origin – Where does ‘Fool’s Gold’ Come From?

“Fool’s Gold” is the name given to iron pyrites, which look a bit like gold but are worth little-to-nothing – as explorer Martin Frobisher discovered in the late 1500s when he returned to England from the North-West passage with reams of the stuff.

The origins of the term “fool’s gold’ grew out of this, becoming a term used to describe anything inappropriately assigned a great value.

The Definition – What Does ‘A Monkey’ Mean?

Colloquial or Cockney Rhyming slang for £500

The Origin – Where does ‘A Monkey’ Come From?

Although it’s now a part of cockney rhyming slang, the origins of a “monkey” and a “pony” being used as financial terms are actually derived from English soldiers returning from India in the 1800s with 500 and 25 rupee notes, which featured the image of a monkey and a pony respectively.

This was then translated across to British currency when the novelty of the notes sank in.

The Definition – What Does ‘Paid Peanuts’ Mean?

To be paid very little; practically nothing.

The Origin – Where does ‘Paid Peanuts’ Come From?

Peanuts’ was always a term used for something small or paltry (since 1840, in fact), but only came to be used as a financial term in the 1940s.

Essentially, peanuts are one of the smallest things that still derive any value – and ‘if you pay peanuts, you only get monkeys’ became a phrase that suggested that poor pay would only ever get you poor workers.

>>> Discover 34 more financial sayings and expressions in the the full guide here!

Ashley Fleming is a blogger and contributor to the Vouchercloud blog. Ashley is a huge fan of the English language and likes to explore its intricacies and idiosyncrasies.

Learn how to really sound like an English speaker but booking a Lingoda class today! Our teachers are highly qualified and available to you 24/7.