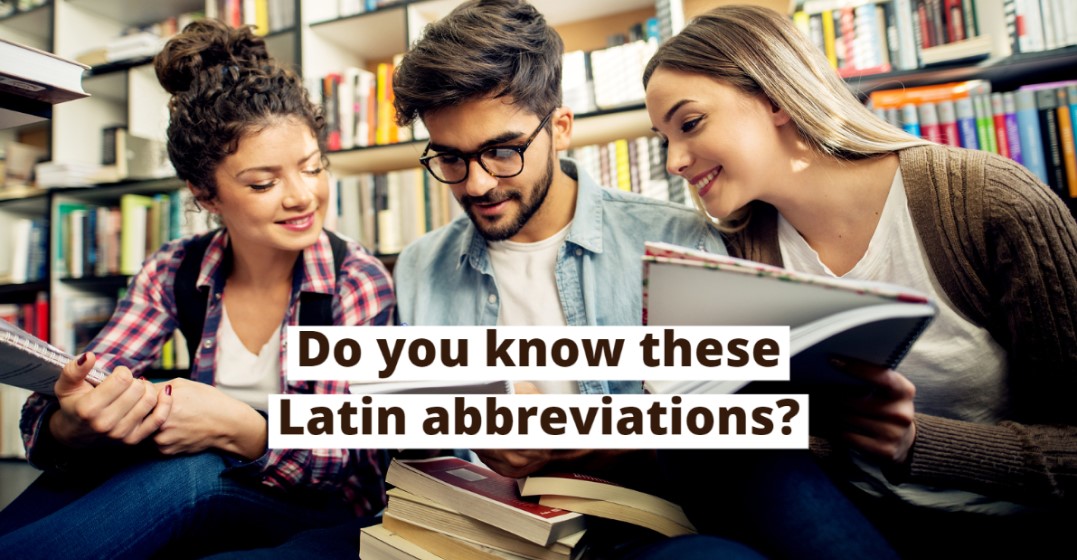 Think Latin is a dead language? That’s not entirely true. You probably already know that English has borrowed lots of words from other languages in the past, and Latin is no exception. There are quite a few Latin abbreviations which are used often in English and they’re really useful for you to learn.

So read on for the 11 most useful Latin abbreviations used in English.

E.g. stands for exempli gratia and can be read out loud as e.g. or fully as for example. We use it when we want to give some examples of something. However, we do not give all of the examples of something with e.g., nor do we use it when there is only one example of what we are talking about. These are good ways to use e.g.: ‘You can choose any filling for your sandwich, e.g. cheese and ham, chicken and mayo.’ ‘There are many famous Hollywood actors, e.g. Will Smith and Meryl Streep.’

Etc. might be the most recognisable abbreviation in English. It stands for etcetera and means and so on or and other similar things. For example, ‘Lots of animals make good pets; dogs, cats, hamsters etc.’ We don’t use etc. at the end of a phrase that starts with e.g.. That’s overkill on the Latin.

P.M., or pm, in Latin is post meridiem. It’s no surprise that this means after noon and is used to talk about times after midday. English speakers don’t use the 24-hour clock in conversation so distinguishing between A.M. and P.M. is important. For example, in the sentence ‘The train leaves at 6 pm’, the pm part makes sure you don’t turn up 12 hours early.

A.D. is used to refer to years, not hours. In Latin A.D. stands for Anno Domini, which means in the year of the lord. It is used to talk about any years which come after the birth of Christ. For example, ‘William Shakespeare was born in A.D. 1564.’ Nowadays, A.D. is being replaced by the (non-Latin) abbreviation, C.E. C.E. stands for Common Era and it is sometimes preferred by people who want to avoid a religious reference.

Ca. stands for circa and means around this time. When we are not sure when something happened, particularly in history, we use this abbreviation. For example, ‘The Industrial Revolution started in ca. 1760.’

Et al. stands for et alii which means and other people. It is often used when citing a book written by several authors, so that you can save some space. For example, ‘Faulkner et al. wrote that…’.

N.B. stands for nota bene, which in English means note well. What it actually means is: Pay attention! It is used to give extra, but important, information, often in the footnotes of a piece of writing. For example, ‘N.B. We tried to contact everyone, but not all participants responded’. It is the only Latin abbreviation which must always be in capital letters.

Vs. stands for versus. It is often used in headlines in newspapers, and in court cases in the United States. In a newspaper you might see, ‘Men vs. women: who tolerates pain better?’ (ahem, women, clearly). Or a famous court case from the US was ‘The People vs. O.J. Simpson.’

P.S. comes from the Latin Post Scriptum, often shortened in English to Post Script. It can be written after you have finished and signed a letter to add something that you forgot. E.g. ‘P.S. Give my love to your mum!’.

Now you know your e.g. from your i.e. and your A.M. from your P.M. So you can say that you not only speak English, but a little Latin too.